Overnight at the Paco de Calherios

Our first stop in the Minho was at the Paco de Calheiros Manor house. Count Francisco de Calheiros is one of the driving forces in the region championing tourism and promotes the Solares de Portugal a collective that offers alternative lodging in family homes ranging from rustic cottages to grand manor estates. The 17th century Paco de Calherios estate outside of Ponte Lima falls into the grand category. The count gave us a tour of his home, starting with the 16th chapel that is the centerpiece of the manor and concluding with the family’s private living area.

It was impressive. Like a massive movie set or a giant clue game board come to life. During our tour I felt like the eyes of the portraits might be following us and I kept expecting Hercule Poirot to show up and sequester us all in the drawing room for questioning. Or possibly for someone to scream out that Colonel Mustard had committed a crime in the dinning room with the candlestick. It didn’t take much imagination to think one of us might not make it through the night to board the bus again in the morning. Hmmm…if only.

Prior to dinner we tasted some Alvarinho wines from Provam presented by winemaker Jose Domingues.

2009 Varanda Do Conde –Made of Alvarinho and Trajadura grapes. I found the scent “soapy” but the flavor very bright and with a crisp fruity flavor.
2009 Portal do Filgado – Very full body compared to the Varanda. It felt like I was actually drinking granite but in a very delightful way. Not harsh or rough.
2007 Coto De Mamoelas --This was a sparkling Alvarinho that tasted yeasty almost like cookie dough, and very tart.

At dinner we were served the traditional Portuguese menu pumpkin/squash soup and bacalhau. It was my first taste of the ubiquitous salted cod known as bacalhau and it reminded me of tuna casserole. Looking back I had fancier versions during the trip but I believe the rustic bacalhau at Calherios was my favorite.

It was also my first taste of the infamous Vinho Verde Tinto (red vinho verde) and all I can say is: Vinho Verde Tinto, while beloved by the Portuguese, is not something an outsider can expect to acquire a taste for immediately. It escaped the norm of any red wine I’d ever had. And it was beyond the capacity of my palate to embrace it’s distinctive flavor profiles. But if you like Lavoris (the popular 1970’s era cinnamon mouthwash) you will absolutely love Vinho Verde Tinto. But proceed with caution!


When you visit the Minho, stop in to visit the Count in Calherios. You won’t find a more charming or enthusiastic host in the entire region. I guarantee it.

The next morning we boarded the bus and it appeared everybody made it through the night. Although one of the producers from the "Hollywood TV" contingent had a close call when walking about the estate in the dark, he took a wrong turn and tumbled into an water collection pool shown below. 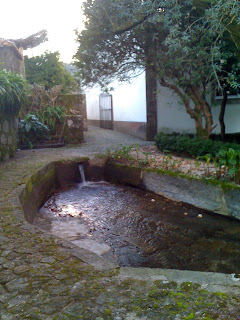 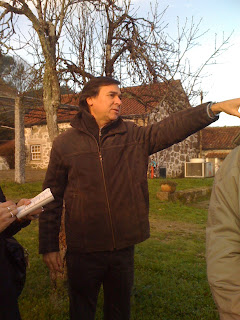 As the sound of fado music (or was it a religious hymn? I can never tell songs of sorrow apart from religious devotionals) drifted across the Lima river, we gathered around Pedro Araujo in the chill morning air at the Quinta do Ameal estate.
If the natural beauty of a vineyard has any effect on grapes, the vines at Ameal should be a case study. Situated above the banks of the Lima river on rolling hills dotted with pines, walnut and oaks, I imagine the Loureiro grapes are quite pampered as they bask in the sun and occasionally have their skins caressed by inspirational music. 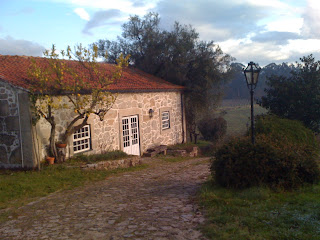 Araujo is making the classic whites and some aged Vinho Verde too with 100% Loureiro grapes.
Normally Vinho Verde is drunk young, but we tried an aged and unoaked 2003 100% Loureiro that defied that construct. You could almost feel the heat of the sun in that wine. I had an extra taste in hope it might help thaw out my frozen extremities. (You know it's cold when your fingers are unable to generate heat and your iPhone does not register the touch of your finger.) 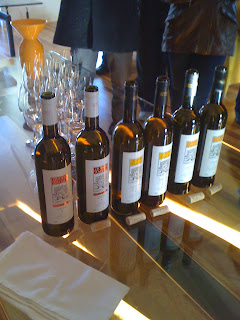 Adhering to organic practices and a very selective field pick, Ameal produces wines that express the best the valley has to offer. They had a very distinct granite and marble minerality, floral nose and green apple notes. Eventually I would have to lick some granite to see if my constant use of this description held up. 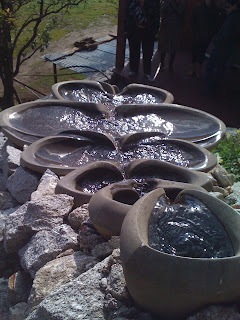 There's a whole lot of Woo-woo going on at AFROS. From the biodynamic philosophy, to the Andy Goldsworthy looking fountain specially built to replicate the way water swirls, flows and eddies along a natural path giving the water life force, to treating the soil with homepatic plant essences determined by the alignment of the planets. For overall Whoa factor, the house of AFROS,
which incidentally is named for the goddess of love, not the hairstyle,


wins the prize. It's hip and it's happening at AFROS.

But the AFROS approach is not marketing mumbo-jumbo. 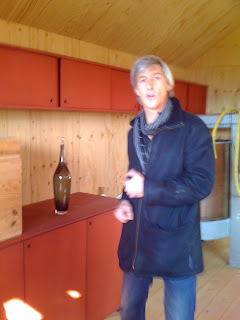 The loco-vores got a long way to go to catch up to the sincerity and esthetic of Vasco Croft.


Vasco's winemaking charkas are supremely aligned and spinning out a harmonious nectar worthy of the wine gods and goddesses. Check out this video from AFROS and you will pick up on the vibe.

We had a intriguing and eclectic lunch paring with the AFROS wines. It was a highly intellectual approach to finger food. 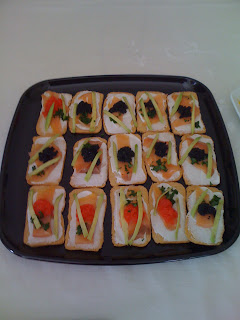 Even the garnish had significance with each crudite created to resemble a hexagram from the I Ching and aligned on the plate enhance the feng shui of the room. Not really, I'm just kidding about that, but it seemed plausible. Yet the food was so captivating, one member of our group fell into a reverie and tried to walk through a glass door. Do not doubt the power of food and wine harmonics! It's very powerful stuff and can be trance inducing. 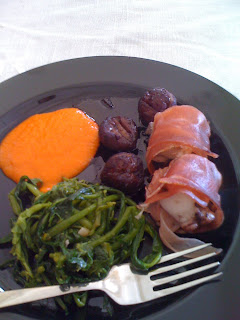 I loved this Octopus and pimento pepper pureee with the Afros 2009 Vinho Verde. 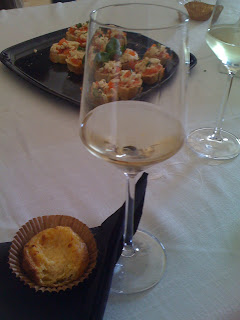 I'm not 100 percent sure but did this Pasteis de Nata have cod in it?? Anyone else on the trip please chime in and let me know. Anyway it was a great pairing with the Vino Verde.

Overall I found the AFROS white wines to be muscular but approachable kind of like Mickey Rourke's character in the Wrestler. The Tinto 2009 was enjoyable and best paired with food. But the Sparkling Red Vinhao Reserve had too much tango for my palate. 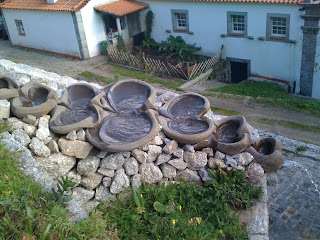 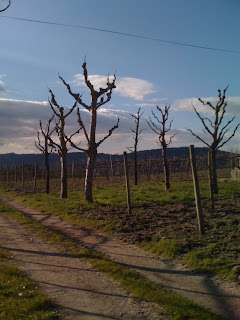 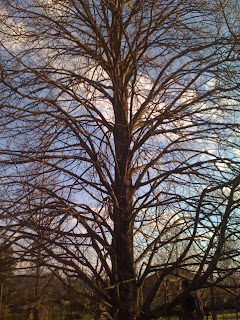 The grounds of Quinta de Santa Maria had a magical quality with some of the most enormous Jack and the Beanstalk looking vines I'd ever seen, and some ancient trees that were like something out of a Lewis Carroll fever dream. I can only imagine what they look like in full bloom. The trellised vines also gave the place a feel of a wine wonderland.

As we toured the production area I heard the wine maker talking about something they made called Vin Agar. I'd never heard of Vin Agar before and was anxious to try it. Turns out he was saying "vinegar" and they produce a Vinho Verde wine vinegar.
In the tasting room we tired the following wines:
(Note: I can't link directly to each but you can navigate there on your own on the Quinta de Santa Maria web site.) 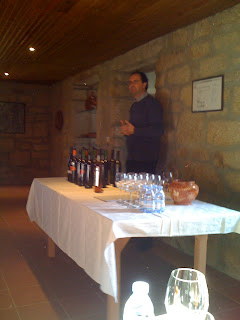 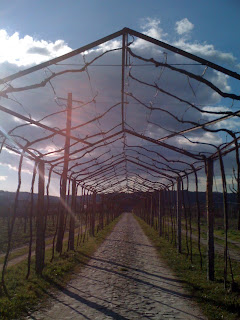 Next: Portugal Part 4: Visit to Sandeman Port, Vini Portugal and more...
By the way, I now realize it may take more than 6 parts to tell the whole Portugal experience. So I might break it down in to more sections. But hang in there with me. It will be worth the vicarious journey.

Videos in the Annex:
The Lagare Collection--What Hipsters Wear to Tread
Slow Travel in Portugal
The Tiles of Portugal
Posted by Marcy Gordon at 3:46 PM