Last Sunday I went to a little harvest party for the release of Meteor Vineyards 2007 Perseid Cabernet Sauvignon in Coombsville. This southeast section of Napa used to be relatively unknown. Practically off the grid. But it's possible the days of Coombsville being just under the radar are over. Coombsville is Coolsville in many ways. 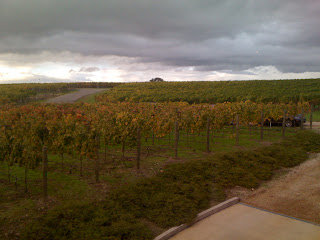 Located on a rocky knoll in sight of Mt. George, the soils around Meteor are an unusual combination of volcanic and clay, with a heap of cobblestones thrown in giving the vines a unique foundation to grow in.
Coombsville is Coolsville with a mild climate and consistent temperatures that keep the growing season long and the fruit less prone to the heat spikes common in surrounding AVA’s. That means the grapes benefit from a long hang time and get the chance to grow up to be the grapes they were meant to be. 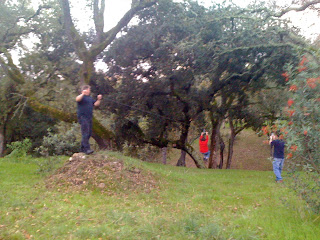 Maybe that’s where the idea of the zip line came in? If hang time was good for grapes maybe it would be good for people too. That concept was put to the test with the Meteor Zip Line.
I did not partake of the zip line due to the fact I was wearing a skirt and I could just imagine it billowing up over my head as I crashed into an oak tree at end of the line. But next time I hope to do the Coombsville Sip n' Zip. You’ve probably never seen a zip line at a regular harvest party have you? Like I said, Coombsville is Coolsville. 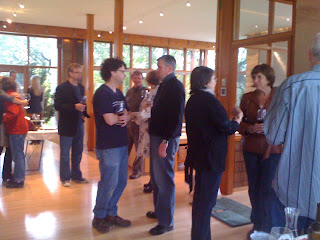 Adjacent to the Meteor vineyard is an exquisite residence constructed entirely of glass, stone, hardwoods and rammed earth. At first glance it looks like an elaborate structure from the elite levels of Angry Birds. Airy, open, and in harmony with the land, it’s the perfect complement to the vineyards that surround it. I mention the residence because it’s here that you see attention to detail is everything. 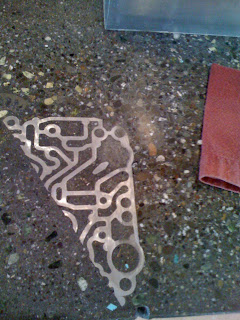 For example, only a mad genius would think to embed a circuit board artifact in the Fu-Tung Cheng countertops, but crazy cool touches like that are everywhere in the home just waiting to be discovered. And that philosophy of nuance and integrated detail shown in the house also seems to be what vineyard owners Barry Schuler and his wife Tracy had in mind when they collaborated with winemakers Bill and Dawnine Dyer to create their wines. 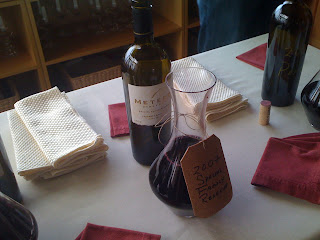 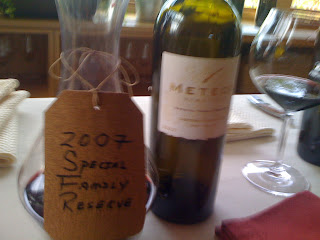 The 2007 nose changed quite a bit in my glass as it opened up from bright plumy notes to a rich tobacco scent. I tasted fresh blackberry and a bit of violet and clover on the palate with good tannins. I’d certainly love to try this wine again in a few years but it was quite successful in the moment. 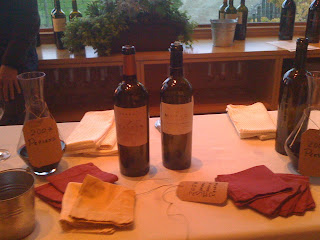 The 2005 and 2006 Special Family Reserves were beautiful. Full, steady, and balanced, the structure reminded me of a chord progression--a Lou Reed riff—deep, dark, and haunting. I’d like to play these lush notes over and over.
Schuler may be a kingpin of the investment and tech world, but beneath his business savvy is the soul of an artist. Actually, he is an artist, a potter, and it seems to me that Meteor wines reflect the same careful hand shaping and artistry as his ceramic pieces. 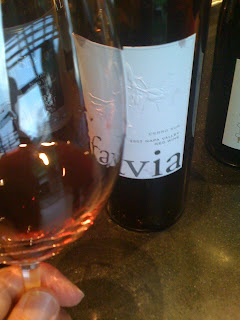 Also at the party were a selection of Coombsville wines from other producers in the area. I wish I had taken more careful notes because I tried several that were outstanding. The Coombsville folks all seem very supportive of each other’s winemaking efforts. Who knows, maybe there’s a serious feud going on somewhere, but it all seemed very Kumbaya to me. Must be that Coombsville is Coolsville vibe at work.
SIDE NOTE: Some wine bloggers may be wondering how the heck I got invited to such a cool Coombsville event at Meteor. Well I guess you could say it’s because of Twitter. 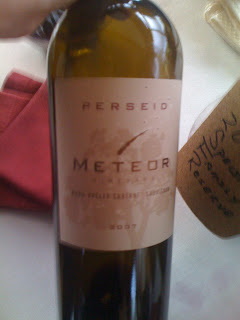 I first met Mr. Schuler at a meeting with AOL back in the dark ages of the early Internet. Before he became the CEO of AOL, Barry led their Interactive Services group and I was working for a company that was soon to launch Travelocity. I think in the meeting he showed us the door and told us to get lost. Just kidding, to be perfectly honest I really don’t remember the details of the meeting. But I do remember he seemed like someone who was going to make interesting things happen.
Fast forward to 2009-- Barry gave the keynote at the Wine Bloggers conference. Now he owned a vineyard and was making wine and I was a wine drinker blogger. We followed each other on twitter. Everything had come full circle.
So kids, it pays to connect on twitter but even more than that, it helps to have had a real job at least once in your life.
Posted by Marcy Gordon at 6:24 PM 2 comments: 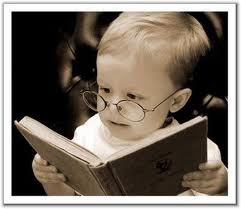 1. The Amateur Professional
Has an actual paying job in an industry other than wine but is a knowledgeable, studious and zealous blogger. 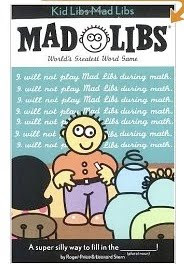 2. The Mad Libber
Reviews wine by using a rotating list of adjectives to describe the “nose” and “mouth feel”. Posts are identical with the exception of the photo. Writing style mimics a Mad Libs game. 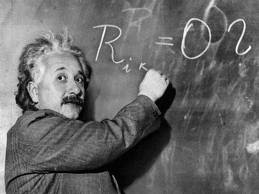 3. The Know-it-All
Pompous and ingratiating, the know-it-all really does know it all; but it does not make them any less annoying. 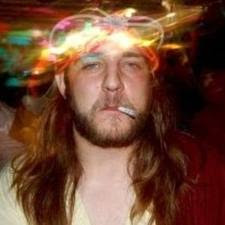 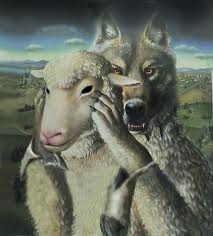 5. The Interloper
Cares little about wine blogging but pumps out enough posts to play the game and actively solicits wineries to send them samples.
Posted by Marcy Gordon at 6:08 PM 16 comments: 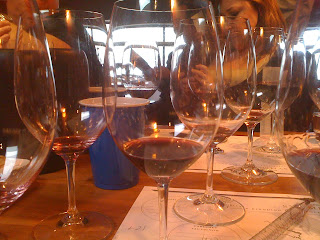 On October 21st I had the opportunity to taste three past vintages of Rodney Strong’s Symmetry Red Meritage, 2004, 2005, 2006 (past), plus the 2007 (current), and the 2008 (pre-release). The event took place at Jackson’s Bar & Oven in Santa Rosa and was hosted by Robert Larsen of Rodney Strong. It turned out to be a seriously fun evening with some seriously nice wines
We began with the vertical tasting of Rodney Strong Symmetry Meritage. My favorites were the 2007 and the 2005. Winemaker Rick Sayre spoke to us about the challenges and rewards of higher elevation fruit, and how over time, the Meritage blend has changed to include Malbec and Petit Verdot in the mix. Rick also spoke about tannin management with mountain fruit, and noted that Meritage from high elevation vineyards can be a tannin monster if not carefully blended.
The 2007 was peppery with balanced tannins and a deep garnet color. As Rick mentioned, this wine has many years of happy cellaring ahead of it, but I’m impatient and like the way it’s drinking now. My other favorite, the 2005, had a rich dark cherry and plums on the palate and I found it to have stronger tannins than the 2007. 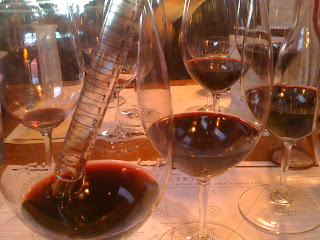 Next we got to engage in one of my favorite wine activities—blending. The last time I blended was at Conn Creek Blending AVA Room and we made full bottles. This time our task was to blend the perfect glass.
Each table competed in teams, first we made our own individual blend and then we selected one blend from the table to move on into the final judging. My table, Team Tannin included @winebratsf @sharayray & @20dollarwine -- and if you know them, you know that spells trouble for our table already. Moving on…. 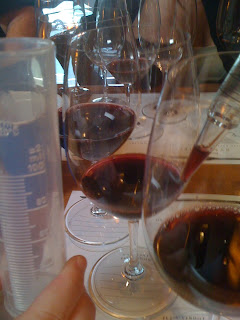 It’s fun to sample the wines and decide what will make the best concoction. It's a great way to learn about each varietal and how they can add a different dimension to a blend. I love the blending part, but the backwards math converting of millimeters part… not so much. This time I cheated a bit and just used the big beaker to measure right off and that made the whole process easier and less messy too.
But the problem I encountered was that I kept losing track of what glass I was blending in. I really needed a grease pencil to mark the blending glass. Instead it all devolved in to a “Where’s Waldo” of blending. 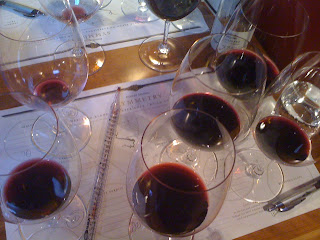 Eventually I got it together and my blend {40% Cab Sauvignon, 20% Merlot, 20% Petite Verdot, 5% Cab Franc & 15% Malbec} moved to the finals. But I could tell from the wince on Ricks face when he tasted my “Fox Force Five” blend that it was a bit too tanninlicious for his taste.
The ultimate honor of top blend went to wine writer Tim Teichgraeber. Well done Tim.
Afterwards we adjourned to the bar downstairs for dinner and to watch baseball on the big screen. 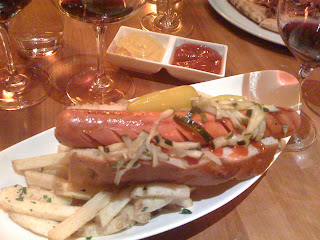 They have a great menu at Jackson’s, but their fancy hotdog seemed an appropriate choice given the baseball and all. Plus it paired perfectly with the 2007 Rodney Strong Reserve RRV Pinot, which had a beautiful lavender nose and a lush, balanced peppery hit that knocked it out of the park for me.
Big thanks to Robert Larsen and Rodney Strong for hosting the event and to Rick Sayer for taking time out from his busy harvest schedule to join us.
Posted by Marcy Gordon at 5:37 PM 1 comment:

Pinot on the River 2010: Festival of Mud

On October 24th, the 7th Annual Pinot on the River Festival took place at the Rodney Strong Vineyards estate. It promised to be a day of singular sensations with over 100 Pinot Noir master crafters pouring their wines. It turned out to be a perfect day for pairing Pinot and Gortex. Luckily I arrived dressed for the occasion in knee high argyle rubber boots, but for some folks less prepared, it was a sloppy event to negotiate through ankle high mud.
I was already very familiar with many of the wines from the Russian River Valley, but not so much with those from the Santa Lucia Highlands. I was very impressed with everything I tasted from the Santa Lucia Highlands and after this event I plan to investigate the AVA further.
Here are links to some of my favorites of the day:
Cartograph
Arista
C.Donatiello
Keefer Ranch
Kosta Browne
Laetitia
McIntyre
Lucienne
LaFollette
Littorai
Meiomi
Posted by Marcy Gordon at 6:44 PM No comments: