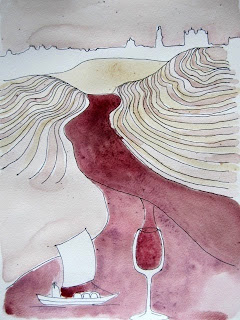 There were over 40 sessions at the 2011 Wine Pleasures conference covering wine regions, wine tourism and social media applications for the industry. The offerings ranged from outstanding to just outright bewildering. But like most any conference, the content can vary wildly. These days I honestly don’t expect much content wise when I attend a conference. Even the American Wine Bloggers Conferences I’ve attended can be pretty so-so in terms of the break-out sessions. (Although I hear the European WBC has superior content.) But I go mainly to meet the other attendees and learn about the wines of the region. It’s rare that I actually get anything of value from the speakers.
But Wine Pleasures had some surprises for this jaded attendee. The opening session by HRM Dom Duarte de Braganca set the tone for the next three days. “Wine is a sign of god, given to us by god.” he said. And although I don’t consider myself religious, I could certainly agree with the sentiment. We were pilgrims of the wine god come to worship the grapes of Portugal.
Due to some connection problems for presenters using Mac’s, I spent most of my time shuttling off from one session to the next lending my MacBook out to those who did not bring the proper dongle. So I missed a few sessions I had planned on attending. Perhaps my badge should have read attendee, speaker, and ad hoc tech support!
Some of the most well received talks were: 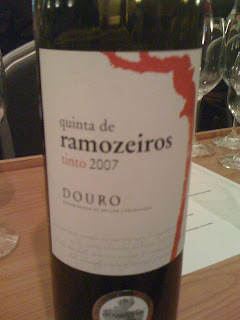 Most popular by far and my personal favorite, was The Surprising Wines of Portugal session led by Charles Metcalfe. And surprising they were. I tasted some incredible wines and found many standouts in this guided tasting:
Best of all the session ended with Metcalfe (who is not only a wine expert, but an opera singer) belting out an aria. Bravo Charles. 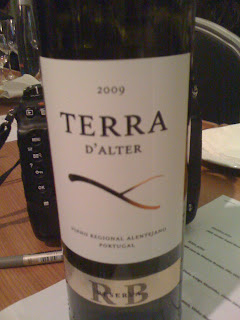 Overall the conference ran smoothly, but in my view, the sessions were scheduled too tightly with only 5 minutes in between leaving little time to linger in the exhibitor area. Also, I was sorry to learn that the primary conference was split from the wine tourism workshop with the tour providers. I would have liked to attend that part and meet the presenters, since I write about travel and wine, but the Blogger/Media group was whisked off to the Douro prior to the workshop.

The food provided during the lunches was very good. I especially enjoyed the Casa do Porco Preto ham from Aletejano bred wild boars in Vila de Barrancos, Portugal near the Spanish border. The flavor was exceptional, a spicy, fatty, porky blend of pure pig joy. (Sorry vegan readers, but that pork was a whole new level of tasty.)

The "standing lunches" were slightly problematic. The plates were so heavy I worried I might get carpal tunnel syndrome. Add a glass of wine to the clip on the side of the plate and you’ve got some serious weight to deal with. I wanted to eat my lunch, not bench press it.
There is certainly room for improvement at the Wine Pleasures conference, but it takes time to get these things right. Yet judging from my experience this year, it seems to be chugging along on the right track.
One veteran conference attendee set my expectations on the first day by telling me-- “Anthony Swift’s conferences are like a beautiful train wreck, you never know what is going to happen next but you can’t bear to miss out on the ride.” It was good advice. I just let go of expectations, and rode the train and what a wild ride it was. I dare say there’s very few conferences out there led by a mad genius like Anthony Swift, a man who has the vision and audacity to pull together a slate of speakers that includes heads of state and Hollywood escorts starlets. (I’ll get to all that soon)
Special thanks to Event Managers Susanna Tocca, Cecília Albino and Sandra Neves of the DOC-DMC group who did a tremendous job in assisting attendees prior to arrival and were very attentive and helpful through the conference and tours to keep everything running smoothly.
I hope to be on the train, bus or magic carpet next year when the conference pulls into Umbria for the Wine Pleasures & Dark Arts Tour. Can’t wait to see what happens next!
Next up--Part 3: Visit to Vini Portugal in the Porto stock exchange building. The Pre Conference tour to the Minho. Overnight in Calheiros Manor House, and the dramatis personae --an introduction to cast of characters on the bus.
Links full Portugal series:
Part 1 The Conference Venue
Part 2: The Wine Pleasures Conference
Part 3: The Minho Land of Vinho Verde
Part 4: A Visit to Sandeman & Vini Portugal
Part 5: The Douro & Visit to Quinta Nova
Part 6: Croft Vineyards & Portrait of Adrian Bridge
Part 7: Foodie Feast at Rui Paula's DOC on the Douro
Part 8: Quinta da Pacheca Lodge and Cellars