Last time I was in Coolsville it was for some zip line action and the release of Meteor Vineyard 2007 Perseid Cabernet. {You can read a full account of that visit here.} This time I went for a meteor shower viewing party and a pre-party vertical tasting of the Perseid Cabernet 2004-2007 and the Special Family Reserve 2005-2007. 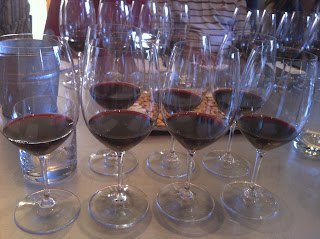 The 2004 Perseid had not previously been tasted outside of the family. I almost felt like we would be sworn to secrecy after trying it and required to take an oath of Omertà--oh wait I’m probably projecting my own Sicilian family traditions here, not Meteor’s. No one at the table was in danger of getting whacked for speaking about the charms of the 04, well, not that I know of at least.

In addition to the pre-set verticals we tried the 2003 “Barry's Half Century” Estate Reserve, a special Birthday Blend created to commemorate vineyard owner Barry Schuler's 50th. The wine had a deep plum color, scents of tobacco and nutmeg, with chocolate, coffee and blackberry flavors. It was luscious and rich, a great birthday gift to enjoy for years to come. 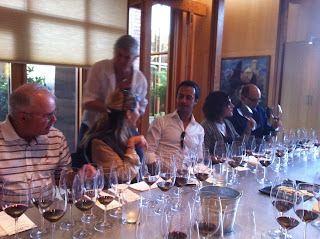 I’ve tasted my way through a lot of Cabernets over the years and I'm always on the verge of declaring that I just don't like Cabernet all that much—and then I taste Meteor and it makes me reconsider. These Cabs always surprise and intrigue me. They are deep, earthy and grounding-- full of diverse flavors and scents like licorice, mint, cinnamon, clove, peppermint, chocolate, violets, leather, truffle, blackberries and plums. In the 2006 Special Family Reserve I found notes of caramelized toffee and smoky s’mores.
Meteor wines get to me in a way that is unexpected and completely fascinating. They keep me thinking about them for days afterward. It must be that Coombsville is Coolsville mystique in action. And it’s not just marketing copy to say something is truly different about Coombsville--official recognition of Coombsville as a distinct AVA is imminent. 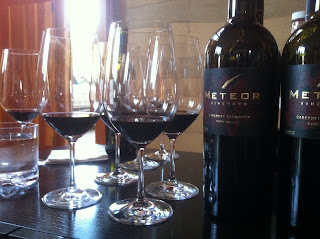 I have a good understanding of winemaking, grape growing and the clones that are planted. But when I first taste a wine I don’t always need to know it’s personal history, I just want to be captivated. I’m curious to discover how a wine inspires me, because I think a great wine can be a catalyst to inspiration for all sorts of creative endevors.
That’s not to say the process is unimportant, quite the contrary, I love hearing winemakers describe it in their own words. It’s always interesting to hear what Meteor winemaker Dawnine Dyer and Schuler have to say. While Dyer might describe one of their clones or wines as full of feminine charisma, or a temptress; Schuler will counter with “This wine is a busty centerfold girl with a mighty rack and body that will suck you in and never let go.” (I paraphrase here of course.) But you can glean the general spirit in which it was said. Yet despite their different frames of reference, Dyer and Schuler are in full agreement that the clones they’ve planted possess all the right stuff to thrive in Coombsville. 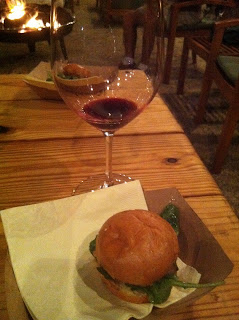 From the tasting we headed outside where the party was in full swing with signature cocktails, spacey music to set the tone for star gazing, and tucked off to the side, a tarot card reader. As the sun set my appetite peaked and I practically inhaled a mini cup of bacon cheddar soup and a few smoked pork belly sliders with caramelized apple that naturally paired perfectly with the 2008 Perseid and Special Family Reserve. Then I got on line to have my cards read. I was relieved to see we only had to wait in line, not zip-line to the tarot card reader.
After dinner, carrying our glow sticks and wine glasses, we followed a path of tiny lights set down like a secret mini airstrip, that led us to the Lone Oak out in the vineyard. Under the oak, Cliff De Lacy, a NASA ambassador filled us in on all things celestial and where to scan the sky for meteors.
A dessert station set with was set to one end of the rows serving coffee and a Meyer Lemon Curd tart with a graham crust as well as a Brioche Chocolate Bread and Butter Pudding with chocolate sauce and sea salt. Both were a delight to enjoy in the moonlight.
In between the rows of vines were recliners and blankets from which you could settle in and watch the sky. It was like a sanitarium in the vineyard. As I lay there I half expected a masseuse to show up and knead my shoulders. It was quite cozy tucked under the blanket between the vines with little clusters of grapes above me and the rocky soil below. Something about lying down in the earth between the vines was extraordinary. It was as if you could feel the very essence of the vines seep into you. As I looked down the long dark row towards Mount George, I could smell traces of mint and fennel, sweet clover, hay and chalky earth. It felt fantastic and rather nurturing. Heck, maybe my true roots are more Druid than Sicilian! Or perhaps there is some kind of harmonic convergence going on between the Meteor vines and land in Coombsville. 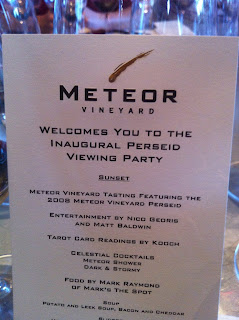 Although the event was billed as a Perseid Viewing Party, I only saw a few meteors shoot across the sky. But the most brilliant stars of the night were all in my glass.
Thanks to all the Meteorites for a stellar evening.