Note: While the Gen-Yine Road Trip is a parody, it is based entirely on real events of Project Yine, I mean really, who could make this stuff up?

S: OMG! Like who lives here Hugh Hefner? What a bachelor pad.

Uncle Terry: Come in Girls, have a cigar, your gonna fly high, your never gonna die, your gonna make it if you try.

S: Um what is he saying? Sounds like he’s quoting song lyrics or something.

UT: Sit down have something to eat… Oh did I tell you the name of the game? It’s called riding the Gravy train….

Uncle Terry sets out an amazing array of food and drink and cigars and they all feast. While they dine Uncle Terry plays a steady stream songs about the lovesick and lonely and 70’s rock ballads.

UT: So Sharayray are you in the market for any surgery?

UT: Well some day you will be. Here take my card. You know we are just dust in the wind. Just a drop of water in an endless sea…but if you ever need gastric bypass give me a call. How do you think my little Niece here can eat so damn much!

UT: See you later girls. Remember maybe a great magnet pulls all souls towards truth or maybe it is life itself that feeds wisdom to its youth.

Uncle Terry lights up a cigar and plays k.d.Lang ‘Constant Craving’ and stares out into the night sky. 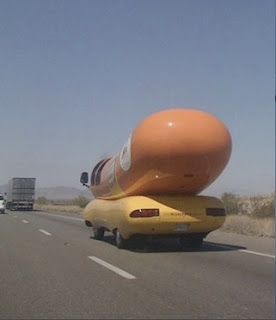 The next day our heroines leave Arizona for their final destination-California. This time Shana drives while Ashley takes a little snooze.

A: —Hey I swear I just saw an enormous hot link drive by.

S: What are you talking about?

A: A great big sausage, like a huge hot dog.

S: I didn’t see anything. I think you meat eaters are all crazy.

A: Well I could go for some bacon burgers and side of fried clams.

S: Eeesh.. Ash, are you sure your Uncle didn’t alter your stomach?

A: No way. I’m just hungry a lot. Hey look up ahead it’s the border!

S: I see it! The border of California! Oh I can feel it! Oh yes! So close…Yes, Yes, Yes, here it comes—AIYYYAAAA (sound of a breaking glass)

Just seconds after crossing into California a 30 foot long all beef wiener comes crashing through the back windshield and wedges into the dashboard.

Yes friends, the worst has happened… Our heroines have been rear ended by the Oscar Meyer Wienermobile in broad daylight. Luckily no one is seriously injured but Ashley’s car and the Wienermobile are in bad shape. As Ashley deals with the police and tow truck, Shana decides to interview the Wienermobile driver.

Wienermobile Driver: Drink? Who said I was drinking? I never ever ever drink and drive the Wiener! NEVER! Nooo. That would be so wrong!

S: Chill out dude, I just meant what do you like to drink when your not driving the wiener….um that sounded weird…I mean what do you drink when you’re off wiener duty, oh nevermind...Dude you should get another job. Seriously!

A&S get a lift to the closest town and rent a car for the remainder of their journey to Healdsburg. As they drive the last few hours of their trip they talk about all that they have learned with the Gen Y-ine Project and survey.

S: Well, there was not much wine drinking going on outside of Austin and our buddies from Another Wine Blog-- Amy and Joe.

A: Yeah it seems like most everyone under 29 drinks beer.

S: And it seems that the beer they do buy is mostly local stuff.

S: And the few Gen Y-iners we found that did drink wine said it was because someone told them about it.

A: Yup, word-of-mouth seems to be the major influencer.

S: And Social Media, while everyone was on it, and uses it, and swears by it, does not seem to be driving a lot of actual sales for wine or beer.

A: Yeah seems to be the case.

S: I think I knew all this already, before we even started this whole trip! I don’t think I really uncovered anything new about Gen Yine and in the process I suffered unbearable heat, horrible food, witnessed the consumption of untold amounts of bacon and other hideous meat products by you and everyone else, had the worst nightmare of my entire life, and then to top it all off-- got road reamed by the freaking Weiner Mobile!!!

S: So I’m thinking where should we go on our next Project Y-ine road trip!!!

Cue music- Waterloo by ABBA as the sun sets slowly over the pacific and our heroines blaze into the night.

Waterloo - I was defeated, you won the war Waterloo - promise to love you forever more Waterloo - couldn’t escape if I wanted to Waterloo - knowing my fate is to be with you Waterloo - finally facing my waterloo