Wines of Portugal - Spotlight on Quevedo 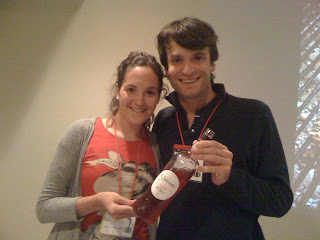 I'm still catching up with posts from WBC09. But this one is long over due.

On Saturday evening at the WBC09 there was a tasting of the Wines of Portugal sponsored by Vini Portugal. Prior to the event I met Oscar Quevedo and Nadia Adria on the bus, and I was eager to sample the Quevedo wines and learn more about their winery. Oscar and his accomplice Nadia perfectly reflect the young, hip, new generation that Quevedo seeks to reach as they position Port as an accessible every day wine.

Although the Quevedo winery was founded in 1991, Oscars Quevedo’s ancestors have worked in the Duoro river valley in Portugal and produced red wines and Port from port grapes of Touriga Nacional, Touriga Franca, Tinta Roriz, Tinto Cão, and Tinta Barroca for several generations.

Both sides of Oscar's family (His father and his mothers side Guilhar-Morias) have been in the port business for over 130 years. So you might expect that Oscar's career path was pre-ordained to join the family business. But Oscar followed his own interests and decided to study finance and economics. After he received his degree, he worked as an investment banker in Spain and Geneva. It is only recently that the lure of family tradition won out, and Oscar joined Quevedo as their Marketing Ambassador and Export manager.

Oscar travels the U.S. and Europe promoting their brand with seminars and tastings to show the range of the wines. Part of his mission is to introduce new audiences to the wonders of port, and change the perception of Port as something only enjoyed after meals with dessert and a cigar.

One of the challenges of Port is that you sometimes have to wait 30 years to really appreciate it. So Oscar suggests Quevedo Porto Rose, as a great wine to drink in cocktails with a spritz of soda water or twist of lemon, and a nice introduction to Port without the wait.

Surprisingly, it in the U.S. that Oscar has found some of the most knowledgeable Port enthusiasts. Michael Wangbickler is one example of such an enthusiast, and his blog The Tawny Times can be found here.

Oscar views bloggers as well as traditional media as the key to spreading his message and uses many tools of social media including twitter to increase the brands reach. Quevedo's comprehensive web site is a great place to learn more about their history and wines and it includes short videos of the current harvest and wine making process. You can also follow Quevedo on twitter at @Quevedo and Oscar at @oscarswine. But the perfect place to start might just be with a glass of Quevedo Special Reserve Tawny Port. Afterwards, let Oscar know what you think!