I’m always a sucker for a slick bit of creative design and The Secret Sherry Society caught my attention right away. The Sponsors room at WBC09 was full of handsome marketing materials, but their elegant black and white invitations and colorful stacks of coasters were a standout. 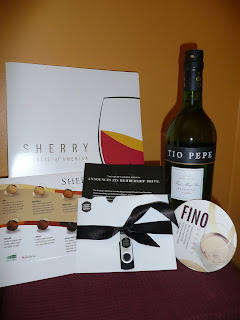 The campaign seeks to bring awareness of the category of Sherry to a new and younger audience. The lead piece, a private invitation, was designed with a black ribbon and “sealed” with the stamp of the Secret Sherry Society. A custom thumb drive was attached to the ribbon.

The envelope contained an invitation to join the secret society. Playing on the fact that Sherry is an oft time over looked wine, the campaign promises members an inside track to “wines best kept secret”. Pretty clever if nobody knows about Sherry than maybe build on that fact to create an aura of exclusiveness –the secret society. The invitation mentions special events for members and hints at “black arts”.

The thumb drive contains a brief introduction to the Secret Society where all members are encouraged to have aliases and wear disguises. That’s it on the thumb drive. From there you are directed to the web site. It seemed a bit of a let down since the premise was so promising but there was nothing more to interact with on the drive so off I went to the web site.

The web site opens up with the standard age verification and then “blindfolds you” before you proceed. The whole thing has a very Baby Did A Bad Bad thing feel to it and looks a bit like the set from Eyes Wide Shut. Heck, who knew Sherry was so kinky?

There are rooms to explore each highlighting an aspect of sherry such as history, growing regions, and varietals. Yes, Margaret, there are different kinds of Sherry out there. Who Knew?

In the founders portrait gallery you can click on the paintings and get a quick synopsis of the different styles of Sherry. Like Moscatel, Oloroso and Fino. There is also an extensive list of cocktail recipes that look worth trying.

The final room takes you to the guest book for sign up and since the whole society is Secret you are prompted to take an alias and then upload a photo and obscure your true identity with various props like a diving bell or a eye patch. Pretty cute and fun to play with.

I have not had sherry since my mom made Coq Au Vin and I use to sneak a few sips . So I tried the Tio Pepe Palomino Fino (15% alcohol) by Gonzalez Byass of Spain. It was light and dry and much more balanced than I expected it to be. This was not my Mothers' Sherry for sure. I could see pairing this with crabcakes or a cucumber salad.

I think Sherry deserves a second look on my part and I'm interested to try the other styles and blog about it in future posts. In the meantime I’ve joined the society and anxious to see where it all goes. I would like to recommend that the Wine Blogging Wednesday group devote a month to blogging about Sherry if they haven’t already. I think it would be interesting to get the impressions of the bloggers on Sherry like we did with the Sake assignment.
Posted by Marcy Gordon at 3:31 PM