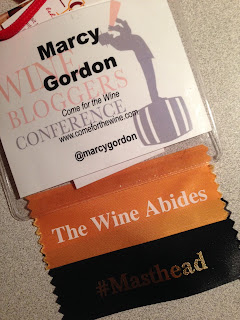 My Friday excursion tag for #WBC16 in Lodi read “The Wine Abides” -- and as I waited with my group to board the bus to our undisclosed location, I realized I’d left my phone charge cord behind in the conference center. I ran back to retrieve it and when I returned the “Wine Abides” bus had up and left without me! Without a roster of who was on what bus it was impossible for them to know who should be aboard. But my missed connection had a very happy ending as I ended up on the “Souzão Berry Fields Forever” bus with wonderful small group consisting of Rachel of Three Strings Wine, Rob Frisch of Odd Bacchus, Josh from Josh Likes Wine, Andrew Pitt from Visit Lodi, Chris Kern of Forgotten Grapes, and Jo-Jo the Wine Guzzling Bear. (I think Jo-Jo blogs for Costo.)


Our destination was St. Jorge a winery focusing on Portuguese wines along with a few Italian varietals as well. Our hosts for the evening were Vern & Jenise Vierra, the owners of St. Jorge Winery since 2007. Jenise’s family heritage is Italian and Vern’s family was Portuguese hailing from the island of St. Jorge, thus the name of the winery. Together, Vern and Jenise have all the elements for a great reality TV show--like a modern Lucy and Ricky, they were a thoroughly engaging and highly entertaining couple. 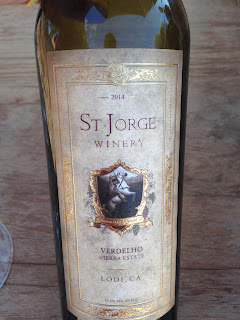 The St. Jorge Estate was like a little slice of Portugal transported to the outskirts of Lodi. After a welcome glass of Verdelho along with some extraordinary Portuguese cheeses and traditional breads, we headed out to the vineyards with Vern. 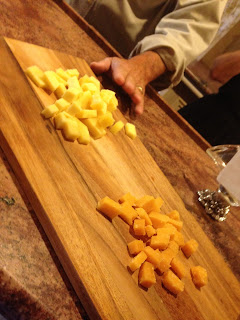 With over 22 wines offered, you are sure to find one that suits your palate at St. Jorge.

It was dang hot out and I drank a lot of water. Perhaps too much water as it had the effect of flushing all the salt from my body of making me feel worse in the heat rather than better, and I struggled through the evening until my electrolytes finally balanced out. Note to self: Water is dangerous!

But that’s not all! 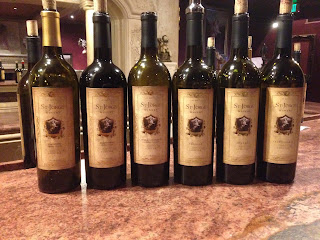 As the air temperature dropped to a balmy 92 degrees, we headed back outside for dinner alfresco in the courtyard with outdoor chandeliers, and elegant glass sculptures atop a long table artfully decorated with fresh cut grapes that I mistook for fake as they just looked too good to be true.

The Portuguese and Italian inspired meal was prepared on site by the long-time family chef Lucia Rogers. The menu was as follows: Gazpacho with a fiery kick of jalapeño paired with 2014 Verdelho; Filetto Carpaccio Salad with 2014 Souzao; Bacalao the traditional cod dish of Portugal with 2014 Trincaderia; Pappa Pomodori Ravioli with 2013 Cabernet Sauvignon; and Port infused Fudge Brownie with Armena & Raspberry sauce paired with 2011 Vinho Tinto Doce. 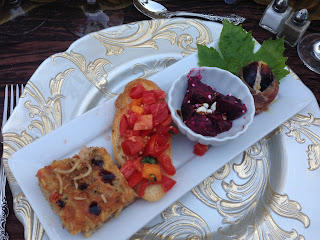 It was an evening of grand hospitality and wine, wine, and more wine!

Grateful thanks to Vern and Jenise for hosting us and also to Mike Shinn, Director of Operations, for his assistance and the lively dinner conversation.

If you visit Lodi, be sure to stop in at St.Jorge. They are open Friday - Sunday from 11-5pm .