Here is the first installment on my road trip to WBC13 in Penticton that I embarked on with fellow travel writers and wine bloggers, Kristen Kearns and Mattie Bamman shown above. 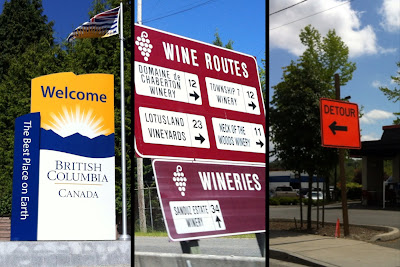 Upon arrival we answered a few questions from the border patrol about the nature of our trip:
“What brings you to Canada?”
"We're wine bloggers!"
"What's that?"
"Um, you know we write, on blogs."
"That's a job?"
"Well actually, we are also travel journalists on assignment. Our first stop is in Richmond."
"Okay, that’s good. Welcome to Canada. Drive on.”
( And no, we were not wearing our #NWroadtrip glasses at the time, we are not complete fools.)

My first impression of Richmond was it appeared very clean and compact and everyone drove a BMW or Mercedes. I really did not know what to expect aside from the fact it’s one of the largest Chinatowns in North America and it’s population is 65% Asian. But, I'm a big fan of Lindsay Anderson and her blog, 365 Days of Dining, about the Richmond food scene so I knew there were culinary delights in Richmond to be discovered. Ironically we arrived just two days before her amazing year of blogging came to a close.

We checked into the Sheraton Vancouver Airport Hotel which is well located in the Golden Village city center. Great parks and public transport are all within a few minutes walking distance, so it’s a good place to base your visit and explore by foot. 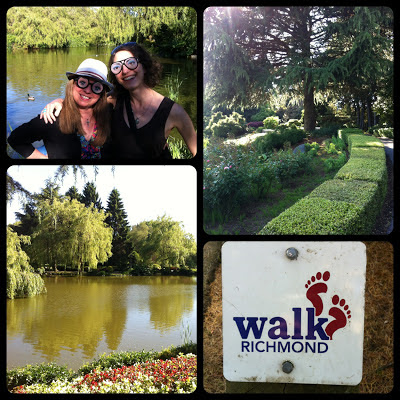 Our concierge at the Sheraton was helpful with directions, but we still got lost walking to Vivacity Restaurant, and ended up in an alley between an auto parts store, a martial arts studio and the back entrance of a big crazy discount store, called Big Crazy Discount Store of course.

But getting lost is part of the charm of discovering any new area. Incidentally, I must say I felt 100% safe walking around, perhaps there are some dodgy areas of Richmond, but I never came across them.

When we found Viviacity, tucked into one of the countless strip malls of the area, I was relieved to see the Richmond 365 sticker on the door that designated the restaurant as one Lindsay had given high marks. Frankly, I don’t eat Chinese food very often. Pretty much never. I was slightly worried as I am highly sensitive to MSG. So, yes, I wanted to have an authentic dining experience, but not at the cost of an authentic migraine. We ordered the King Crab as it was in season and came highly recommend. Prior to our order being placed, the Crab was brought out to meet us. It was enourmous. 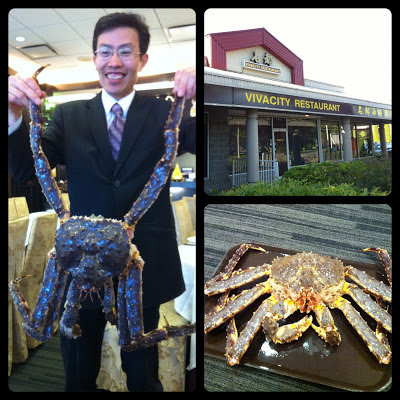 Right before our host carted Mr. King Crab away I eked out--“Um, No MSG? Okay?” and he looked a bit surprised and then replied "Okay, we prepare without.” I later found out they don't generally use MSG anyway, so that may be why he looked surprised by my request.

I felt kind of bad about seeing the crab alive and thinking it was begging us not to eat it, but you know, once it arrived and I tasted it’s tender flesh, I forgot all about it staring at me.

The crab was prepared three ways. Steamed, with garlic and scallions. The scent was heavenly. 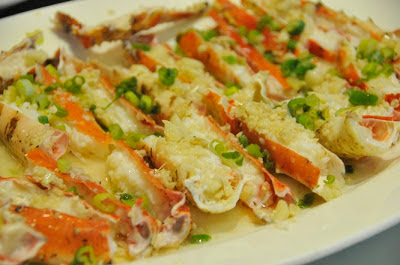 Curried, with rice served in the crab shell that appeared to be the size of a football helmet. 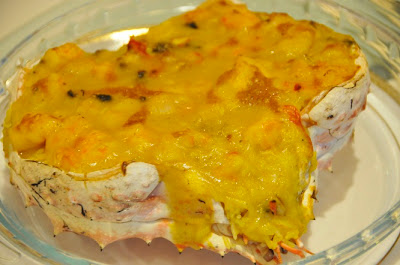 And deep fried, with salt and pepper and thinly sliced jalapeno.


I loved the salt and pepper style. It was crisp and crunchy on the outside, with succulent hunks of rich and flaky-white meat on the inside. It was so perfectly flash fried without a trace of oil or grease whatsoever and delicately seasoned. The fried slices of garlic snapped like tiny potato chips. I rated it Two Yums Up.

I noticed that everyone else in the restaurant had boxes stacked on their table and it was obvious that part of the dining experience was the sizable take home portion of the meal. Our host’s face dropped when we declined to have him wrap up the remains and then we realized we had refrigerators back in our rooms, so we asked to take it with us it and it made him so happy. Plus, I figured, if we got lost walking back, at least we would have food.


That said, we were about the only people on foot in the area, but it allowed us to discover places like this--Super Bored -- which despite our expressions, we were not bored to be there in the least.


It was super weird in parts of Richmond, yes, but I guarantee you, if you visit, you will not be Super Bored. Quite the contrary. It’s like landing on another planet. A planet where all the good stuff to eat is hidden in plain-sight. So wander about, poke around, follow your nose, do NOT judge a restaurant by it’s location, and you will have a great time in this curiously delicious place called Richmond, B.C.

My recommendation to foodies visiting Richmond is consult the Richmond 365 Blog website to determine what style of food you are seeking and follow Lindsay’s suggestions.

Note: You can find Matties perspective on the same meal here.

NEXT UP: Spot Prawns at Blue Canoe with Chef Ibarra in Steveston Village, Richmond,B.C.

DISCLOSURE: I sought assistance from Richmond Tourism with some details of the trip described above including lodging and two meals at dining establishments that I specifically requested. I rode in a car owned by Kristen Kearns and paid for one tank of gas with my own money because that’s what you do on a road trip-- you share expenses with your travel companions. I drove approximately one-third of the way from Richmond, B.C. to Oliver, B.C. and was glad to do so because frankly, Mattie Bamman drives way the hell too fast, and like most men would rather drive in circles forever than ask for directions. {Just kidding Mattie, ya know I love you.} All opinions, reviews, and remarks--favorable or otherwise, are my own and the content above has not been vetted or approved by any tourism entity or other person that might in some way benefit from my account of the events. Okay? Okay!