Wines of Italy: The Great Indoors of Benevento 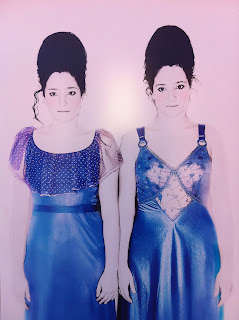 The night of my birthday I had a strange dream about being stranded in the hotel and stuck in the elevator; when the doors opened I saw Diane Arbus like twins standing foot deep in a sea of blood red merlot. It was right out of The Shining. No wonder I had that dream, with artwork like the one above in the hotel lobby, the red bar, and the snow outside, it did not take much for my subconscious to conjure a scene from the Overlook Hotel. REDRUM TOLREM REDRUM!


Around 5am I was snapped out of my dream state by the sound of gunshots cracking through the eerie muffled silence of the pre-dawn. I looked out my balcony window to see our bus partially camouflaged by snow. Then I heard another gun shot and realized it was just the sound of tree limbs snapping under the weight of the snow. 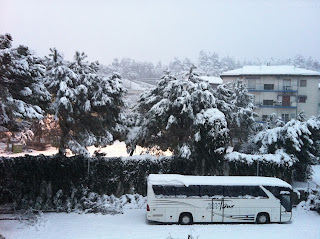 I took a quick look at my twitter stream to make sure no one in our group had repeatedly tweeted  “All blogging and no wine makes Jack a dull boy.” Considering the circumstances it would have been appropriate. 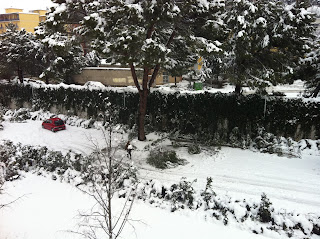 My dream proved to be slightly predictive of what the day held. Due to the weather we were temporarily stranded and our visits to TerreDora, Mastroberardino and Cantina Feudi di San Gregorio were canceled. This was a huge disappointment to all of us, but probably no more so than for Daniela Mastroberardino who was eager to show us her winery and the Iripina region. But no amount of snow or disappointment could keep the irrepressibly bright and cheerful Daniela down or prevent her from coming up with some creative alternative plans for the bloggers. First up was an informative overview of the Campania region by Daniela, who in an inspired bit of super-meta-Italian-creativity used a bread stick as a pointer in the presentation.


Following the presentation we made our way through the empty halls and a darkened dining room to the kitchen where Chef Angelo D'Amico and his staff gave us an impromptu cooking demonstration followed by a wine tasting. 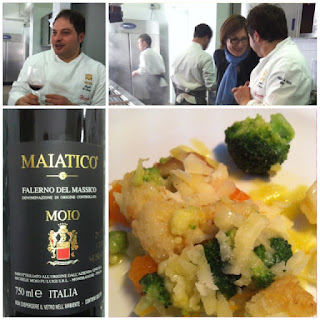 The Hotel il Molino used to be a factory for the Rummo brand pasta so it all came full circle in the kitchen.


The dishes Chef D'Amico whipped up for us were so simple but so satisfying. First he made a traditional Campanian pasta dish with potatoes, tomatoes, some black pork, and anchovies. 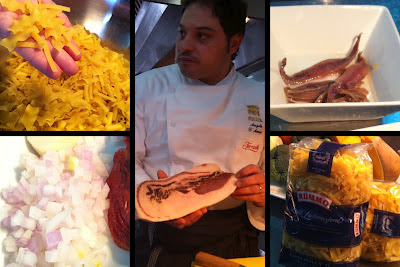 Next, he made use of some day old bread mixed with sautéed garlic, onions and browned vegetables to create a savory dish I could of happily eaten everyday! Topped with some grated caciocavallo cheese it was like an inside out vegetable pot pie. 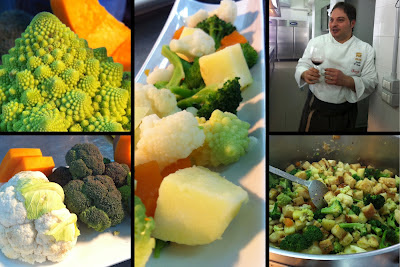 The Greco di Tufo D.O.C.G.by TerreDora, an unoaked white with a bright acidity and a peachy/apple nose, paired surprisingly well with the potato pasta. 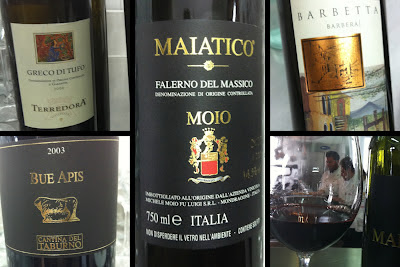 One of the reds we sampled was a Moio Maiatico Primitivo that really snapped my head back. I took a sip and did a double take! The Primitivo grape is supposedly the Italian version of Zinfandel and I found this wine to be full of flavor but not overly jammy or sweet. There were notes of blackberry, black pepper and a touch of green olive. It had full body, nice soft tannins, a long finish and it was a even a bit salty too in a very good way. I was ready to grab the remaining bottles on the table and head back to my room for more, um, research on this wine. But a few other bloggers quickly caught on and the wine was finished in an instant. Oh how we pine for the ones that get away....

I was quite impressed with the cooking demo and my hat's off to Daniela and her team for turning a possible disaster of a day into a fun learning experience. Turns out the Hotel il Molino is a great place to get stranded. The rooms are large and comfortable and the staff is most accommodating, especially in the kitchen. You can find the recipes for the dishes Chef D'Amico made here.

All Aboard the Wine Bus 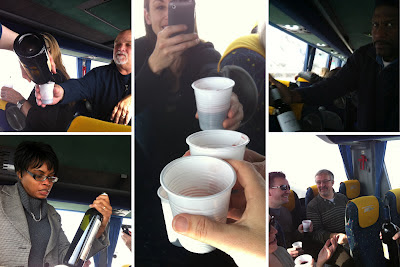 Later in the day we were able to board the bus and head to Naples. We were only 40 minutes away, but the trip took hours due to the snow and traffic. Luckily Mr. Wine Bus passed out tiny cups so we could hold an impromptu tasting as we inched along the highway. It's not a wine bus without wine!