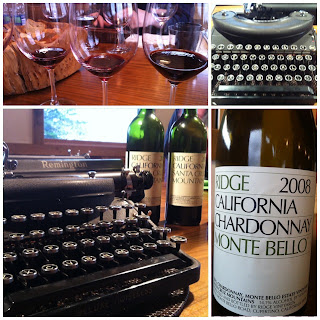 The final Ridge Vineyards Blogger Invitational of 2011 was hosted this past Sunday, December 11th, at Ridge Monte Bello in the historic barn that served as the very first tasting room for the original winery. In the barn our host, Christopher Watkins, set the stage for the tasting theme--Historic Family Farmers-- Back in time to the original family farmers that started the vineyards know as Ridge today.

In keeping with that theme, we tasted 3 never before tried by the public wines from the Torre, Klein and Perrone vineyards. These tiny production wines are a part of the Historical Vineyards Series and were sourced entirely from the original planting locations, each wine named for one of the founding families -- Torre, Klein and Perrone. These small quantity wines are actually "beta releases" in a way, harvested from sub parcels, following a premise of "viticultural gerrymandering" based on original planting areas.

Also part of the tasting was a vertical of Ridge Santa Cruz Mountains Estate Cabernet. 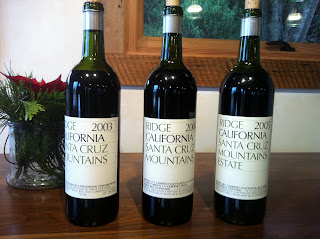 But there was more to the "Historic" theme-- Christopher brought in four curious machines--ancient hunks of metal, steampunk style communication devices--called typewriters, and each blogger was required to "go back in time" and write a tasting note using one. 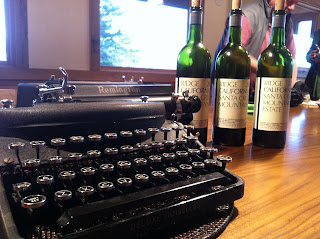 We got warmed up with a splash of Monte Bello Chardonnay 08-- always a pleasure.

Today the oldest vines on the property are those planted by William Short in 1949. Prior to Short acquiring the property John Torre planted 100 acres on Monte Bello ridge and the old Torre winery building is now the Monte Bello tasting room. 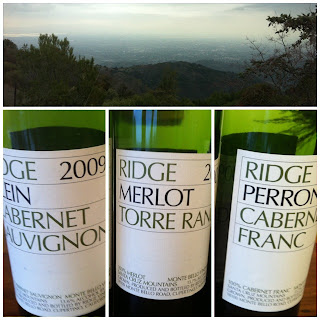 Klein Cabernet Sauvignon 2009--
Very young and green on the nose with eucalyptus and earth tones on the palate that opened up with more dusty notes and medium-soft tannins.

Torre Ranch Merlot 2009 --
This wine is just a baby in terms of it's longevity and has lot's of room to develop over the next several years, but I really liked as is. It was full of flavor with plums and violets and spice. Also a brief whiff of  oregano in there. Beautiful garnet color.

Perrone Cab Franc 2009--
A tone poem of bright fruit. Very berry, with perfume of violets and a burst of acid. Of course these wines have a lifetime ahead of them, but the Perrone was distinct and fresh and most enjoyable in the present state. The Perrone was my favorite of the Historical Vineyards series. 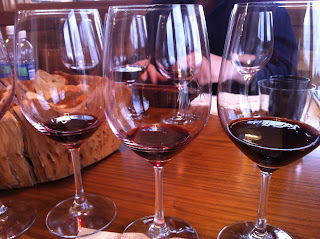 With these beautiful wines inspiring our palates and our brains, it was time to hit the typewriters-- below are Fred Swan and Jeff Solomon striking out a tasting note.

I wrote a tasting note channeling the spirit of Mattie Ross from the Charles Portis novel, True Grit-- because in a way that's what Ridge wines have --True Grit. Not in a literal sense, but in a sense of honesty and purity of intent. Unfortunately my first attempt at typing the note was foiled by the fact you must manually advance the paper to the next line...so things go a bit cramped on the page.

Next we tasted a Vertical of Santa Cruz Mountains Estate Cabernet. These wines all 100% estate grown were being featured as a holiday 3 pack in the tasting room. You better have been a very good boy or girl this year if you expect to see these beauties under your tree. 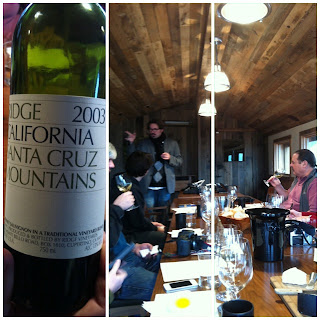 Ridge 2004 Santa Cruz Mountains Cabernet  -- Chalky nose with blackberry, current and minty fresh flavors. Tannins were supple but with room to bend--may need a Thai massage to loosen up a bit.

Ridge 2005 Santa Cruz Mountains Cabernet  -- I found it dusty on the nose at first, that then developed into light florals with a hint of cocoa and spice. On the palate it was full of dark fruit, very concentrated-- but it's still tightly wound and needs some time to unwind. 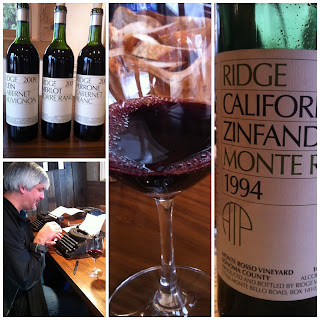 By the graciousness of Mr. Alan Bree, we were treated to a lovey Monte Bello 1985 Zinfandel from his private collection, which after quick calculation, Christopher determined that by drinking the bottle, of which only 33 barrels were produced, we had just enjoyed 5% of the worlds know supply of Monte Rosso Zin. Wow.

Thanks Alan. And thank you Christopher, for another fun, inspiring and enlightening blogger tasting.