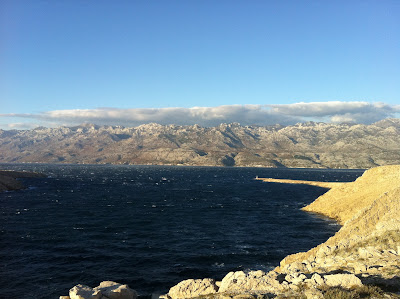 They say the best wine often comes from vines that struggle. The effort put out by vines to find water in arid climates or dry-farmed regions makes the grapes that much better. Well the same must be true of sheep. The island of Pag is one of the most rugged and beaten down places I've ever visited. It looks like the Alps melted into the island, leaving just the rocky barren tops visible. And it's here that the special herds of sheep struggle against the elements on a daily basis and make one of the greatest cheeses in the country. These sheep must be like the terriers of the sheep world, they are tough and don't give up easily. I don't quite understand how such restricted diet and harsh conditions creates sheep with a milk that has a high fat content. One would think it would be the opposite, thin, almost fat free milk. But that's not the case with the sheep from Pag. They are small, compact and high fat. Sort of like me. 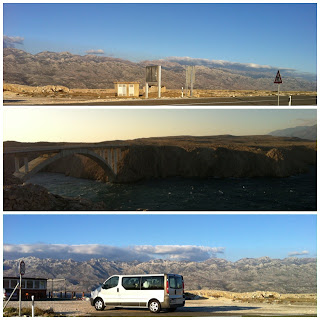 When we crossed the bridge leading to Pag the famous Bura/Bora wind kicked up, so we got out to take a look or have a feel as it were. Yowza! That was some intense wind. Signs were rattling like something out of Close Encounters and the sea was whipping about as if a huge eggbeater was being used from above. You could see patches of white water roiling like furious mini dust devils. I could barely stand upright, and as I made my way back to the van a man came out of a stone building near the bridge. I asked him if the ripping wind was normal for the time of year. "This is nothing!" he said. Apparently it was a mild day in Pag. 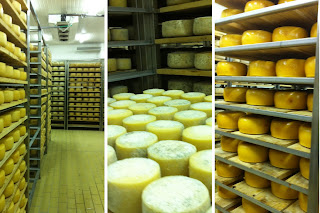 I first became acquainted with Paški Sir when I hosted my Wines of Croatia tasting. US importer, Michele Buster of Forever Cheese, arranged for me to get the cheese locally in St. Helena. The cheese was one of the big hits of the day-- pairing well with both white and red wines and exceptional on its own. It's a hard cheese, but very rich and tangy with little white granules of tyrosine that crunch in your mouth, giving it a sensation sort of like pop rocks.

Unfortunately we were running a tad behind schedule so we arrived quite late in the day to Paška Sirana, the oldest cheese factory on the island of Pag. Our hosts were wonderful and I realized what an effort they'd made to accommodate us when Nenad Škoda, who led the tour, mentioned that normally all production in the factory is usually completed by noon each day. That meant these lovely people had been hanging around most of the day just to show us the process live. 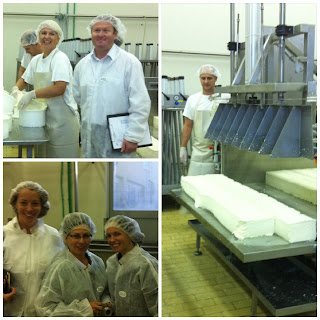 Prior to the tour we donned hairnets and coats to keep our bad bacteria away from the good cheese bacteria. 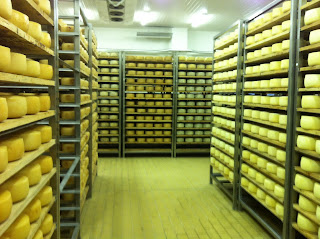 The dairy has grown from a small cooperative to the largest company on the island and it still makes the cheese using centuries old methods, but the new factory was built to meet the high standards of the EU which Croatia is set to join in 2013.  It remains to be seen what the effect of joining the European Union will have on their traditions, but they are prepared to meet the new EU requirements and preserve their heritage of cheese making at the same time.

The sheep of course are the center of the entire operation, and Paška Sirana manages a herd of around 3,500 that provide the milk daily. The rest of the raw milk comes from local farmers on the island. The most productive age of the sheep is between 3-8 years. After 9 years of age they more suited to being roast lamb. And roast lamb is king around the Croatian coast. We saw numerous road side spits, a few with actual lambs roasting inside, as we drove through several small towns. Mmmm.

After the factory tour we tasted several varieties of the cheese. I loved the new sage infused style, but it is not yet available in the US market. We were given samples of a new grated style of paški sir that looked like parmesan but with a more robust flavor.

This past week Paška Sirana won 4 medals at 2011 World Cheese Awards for their PAŠKI SIR, PRAMENKO, MEDITERANO and DALMATINAC cheeses. Congratulations to the entire team.

Although Paški Sir is not that common stateside, it can be found if you put some effort into your search. Be tenacious, like one of those hearty Pag sheep and I'm sure you will be successful. {Hint: contact Forever Cheese for help}

Here's a link to another article about Pag by Matitie Bamman who was also on the trip.