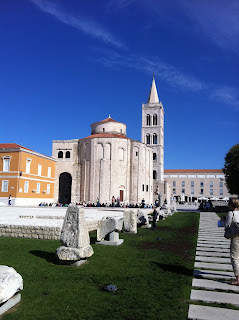 My visit to Zadar was like a round of speed dating. We sat down, said a few words, and then --Ding! Ding! Ding!--the bell rang and it was time to move on. I wanted to spend more time in this place with so much to offer-- a mixture of modern art and archaeological treasures.


Oh Zadar, I feel like I hardly got to know you. But what I did see of you makes me want to go steady. I want to hold hands with you and stroll the market, feed each other burek and share some wine at sunset as we listen to the sounds of the sea organ. I know if we had more time together, I'd probably be introducing you to my folks at Thanksgiving dinner.

The compact section of old town Zadar is connected by causeways and has restricted car access making it easy for pedestrians to wander around. We stopped for a quick coffee and some burek, the flaky cheese filled pastry that seems to be a national obsession, then we went off to the market. 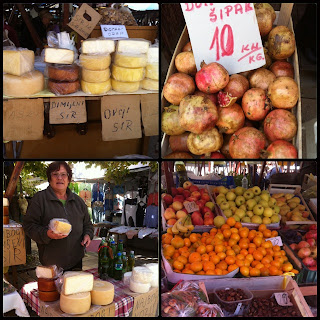 I would show you pictures of the burek we bought, but it was an obsession for certain travel writers in attendance too, I never had a chance to get a shot before it was devoured. In old town we met up with our charming and well-dressed guide Stjepan Felber, who hosted us on our trip to the Maraska factory to sample the cherry juice and Maraschino liqueurs (more about that in the next post) and for lunch at 2Ribara a modern looking restaurant in the Varoš section of old town Zadar. 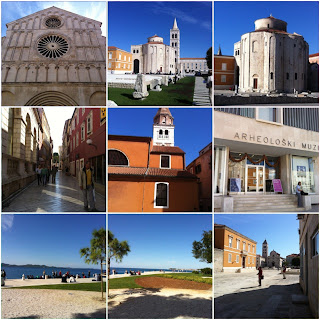 Sea Organ
The most captivating spot in Zadar by far is the Sea Organ. The Sea Organ designed by Croatian architect Nikola Bašić, is incorporated into the sea wall. It’s a whimsical love note to the ocean, and an artistic engineering marvel--as the waves roll in, the song of the sea is played. The music was haunting and hypnotic. I could have stayed there all day. It’s a gathering point for locals and visitors alike and watching the sunset is a daily ritual. In Zadar the sunset has it’s own musical accompaniment. And after dark there is a light show as well. Take a look in the video below.

2Ribara
For lunch we went to 2Ribara (Two Fisherman) where we met Ivica Kujundzic our waiter and knowledgeable sommelier. Sommeliers are so cool. It's people like Ivica who make learning about wine a great experience.
He poured samples of a few wines before we settled on the Korlat Cabernet Sauvignon, a Smokvica Posip from Korcula, and the Adzic Graševina from the Kutjevo vineyards for the main meal. 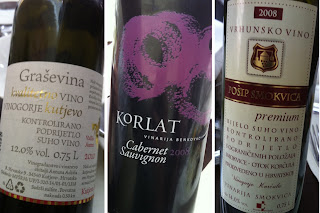 The Graševina was crisp and full of apricot and apple flavors with slight nutty taste, perfect with the octopus salad and the fish. The deep, dark Korlat paired well with the grilled fish, the spicy notes of violets and black currents were not overpowering and the tannins were firm but balanced. I'd never have guessed a Cabernet would pair so well with seafood dishes, but the Korlat was a delicious exception to the rule. 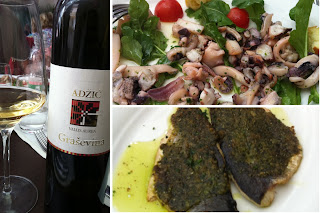 For dessert Ivica poured me mystery wine and asked me to guess what it was. I said it tasted like Sherry. “Yes, it's Sherry but not from Croatia. It’s Nier Mundo de Sueño from Spain,” said Ivica. 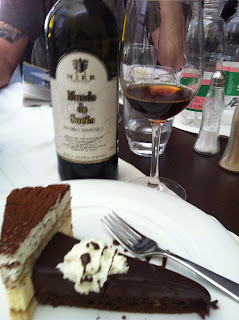 “Hold on there,” said our guide. “These writers are here to learn about Croatian wine!” 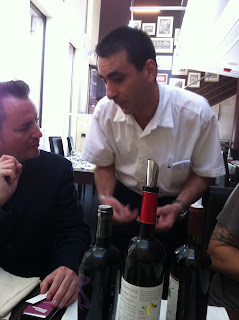 Ivica shrugged his shoulders. “It’s very good, that’s all that matters.” he replied.

And that’s it in a nutshell--when something is good you can’t help but want to share it and spread the word. Ivica was the real deal. He wants to turn people on to great wines no matter where the wine may originate. Bravo Ivica! 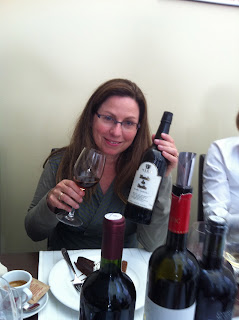 So here is what you must do in Zadar: Visit the market and buy some burek, cheese, figs, and of course pick up some wine. Then just before sunset, go hang out by the sea organ. As the sun sinks on the horizon let the mesmerizing sounds wash over you and sip some wine. Then sip and listen. Sip and listen. Gaze out to the sea. It does not get much better than this.

I have a hunch if you visit  Zadar you'll want to go steady too.