Croatia Part 2: The Splendors of Split

A dash of red pomegranates to the left, a slash of blue sea to the right, and straight-ahead, looming high in the distance, a salt and pepper ridge of limestone and granite cliffs. That was my first glimpse of coastal Split. Before my trip I read many travel articles comparing Croatia to other places, such as Italy. But in Split the sun seemed brighter, the mountains closer and sea's horizon was filled with the undulating shapes of distant islands. After arriving at our hotel I took a little walk around the beach area. The vibe was very familiar but altogether different, not quite Italy, not quite Greece, it was a mish–mash of its own. Croatia was not the new Italy as I'd read--I’d say Croatia is the new Croatia! 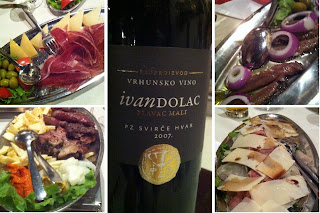 I was a little worried about what my first meal in Croatia would be like after I met Ivan, a Croatian living in California near Sacramento, who was on my flight from San Francisco to Split. Ivan told me he was bringing a suitcase full of Jiff peanut butter and Oscar Mayer bacon on special request for his friends and family. I was confused why people who lived in a country that supposedly had some of the best food in the world would desire peanut butter filled with partially hydrogenated goo and bacon shot throughout with nitrites and sodium phosphates. But within a few hours all my concerns were alleviated as I had the first in a series of great meals that set the tone for the rest of the trip. I chalked up the Jiff and Oscar Meyer to those odd hankerings people get for foreign foods. It's not so much that it’s good, but it's different.

The first night in Split we dined at Konoba Varoš where I got to know our driver Dino and the other four journalists on the trip. Ordering was pretty simple, you have two choices: Grilled Fish or Grilled Meats. Or just tell the waiter to bring it all!

For starters we had the following: 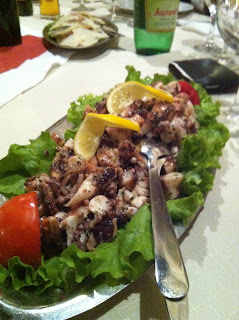 Salata od hobotnice -- Octopus salad with boiled octopus and onions dressed with olive oil and lemon juice. We had this many times over the next several days and I never tired of it. So fresh and simple and delicious with a crisp white wine like Pošip. 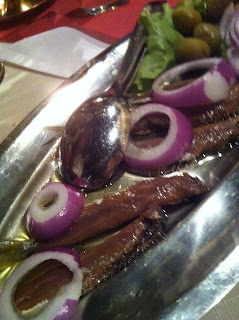 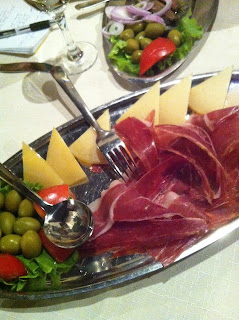 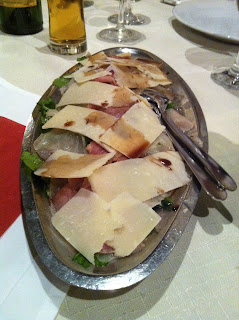 Mesni carpaccio-- a carpaccio of raw beef fillet on a bed of rocket greens and drizzled with a sauce of olive oil and balsamic, lemon juice and covered with Parmesan cheese. Yum-o-rama. 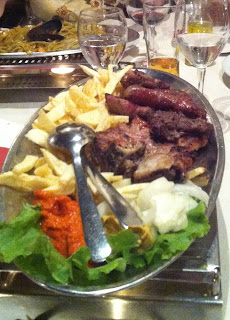 We also had a platter of grilled meats that included the most succulent little things called cevapis that look like breakfast sausages, but are a far cry from Jimmy Deans. Cevapis are not encased like sausage, but more like rolled kabobs of beef, lamb or pork. There were also pljeskavica, small meat patties like hamburgers that were grilled with just a bit of seasoning and served with my new best friend - Ajvar. Ajvar is the fiery orange-red condiment of choice made from grilled peppers, eggplant and garlic that adds a piquant dash of joy to anything you slather it on. 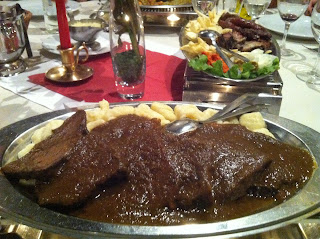 For an entree we had gnocchi with beef. The gnocchi was light and fluffy, the perfect vehicle by which to sop up the dark sauce covering the braised beef. Asked how exactly the dish was made, we were told the beef was marinated in olive oil and wine for 24 hours and the sauce was made with plums, prunes, pears, and vegetable stock. When pressed for more details the waiter merely said the sauce was a secret process. “It’s a process.” Hmm… we would be hearing that a lot in the days to come. 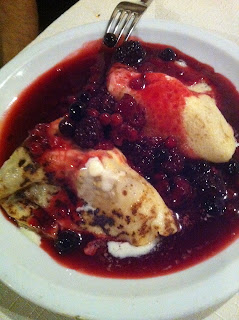 Desert-- Palacinke (pancakes) filled with tresnja (cherry) Sir (creamed cheese) and Jabuka (apple). I skipped desert, but I must admit I would have been very happy with a bowl of Ajvar. 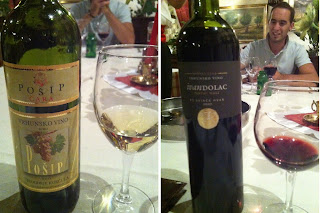 Wines
Pošip Čara 2010 from Korčula and Plavac Mali ivanDolac 2007 from Hvar. The Plavac Mali was a most versatile wine--deep dark berry flavors, spicy with good tannins--it was perfect with the hearty meat dishes and surprisingly good with the seafood too.

I know what you may be thinking-- how did I possibly eat all this? Well I’d been up for close to 30 hours and I had to make up for lost calories.

Scenes of Split--
The next day we met up with a local guide also named Dino, and took a walking tour of Split. 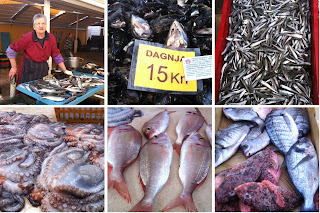 A trip to the fish market foreshadowed lunch as we walked past the various offerings. Next we explored the walled section of town and toured inside the former palace in historic Split. 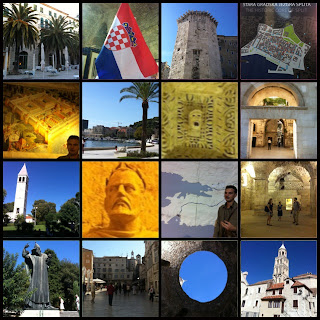 One odd thing I noticed in Croatia, I saw very few policemen. In other countries the tourist areas are full of armed officers in uniform patrolling the perimeter. Maybe the cops in Croatia are all in plain clothes, but nevertheless, I felt very safe everywhere we went. Except for one fleeting moment in Split, when a huge block of a man came trudging towards us from across a plaza. I was struck by his size and he literally looked like Frankenstein, a solid oblong mass of flesh and bones with squared off head and shoulders. His wrists cocked backwards as he walked as if he were paddling through the air. Of course my first instinct was to take a photo, but as he moved closer something told me that was not a good idea. It felt like an invisible energy field was spread out before him and everyone scurried aside to make way. 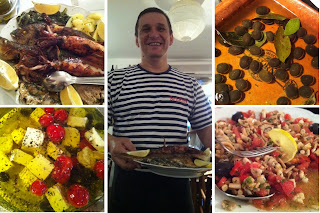 Lunch --Restaurant Šperun
At Šperun we enjoyed a fresh array of mixed grilled seafood and some amazing anchovies. If you need just one reason to come to Croatia—let it be the anchovies at Šperun. Their bright sea flavor with a trace of olive oil, lemon juice and garlic will have you clapping your hands like Flipper at SeaWorld.

Resturant owner Zdrakvo Banovic, who had a movie star air of Clark Gable about him, stated his goal is to serve an eclectic menu of authentic dishes based on Mediterranean cuisine that present Croatia as its own particular place with grilled meats such as lamb, and fresh fish dishes like his black cuttlefish risotto. He does not offer tiramisu. “Our identity is Croatian, not Italian and our cooking is representative of the region,” said Banovic.