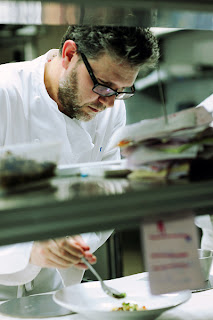 Q: Who will play you and Lara in the film version of your Grantourismo adventures?
One of George Clooney’s illegitimate sons would play my role. I’m sure he has one and George is too old to play me. Lara would have to be played by an extraordinarily beautiful Russian model. (I don’t like sleeping on the couch.)
Q: In the film Goodbye Lenin! there is a scene where they are airlifting a statue of Lenin over the city by helicopter that is straight out of Fellini's La Dolce Vita and it's so spot on iconic. What iconic scene from a film illustrates or punctuates your life of travel?
The scene in Betty Blue where Betty stabs a restaurant patron with a fork. I have no idea why. I think it’s because there is something so off-kilter about our lives.


Q: You are a fairly dapper guy...If you were fashion king: What one article clothing/footwear would you forbid men to wear?

‘Wife-beaters’ (the Aussie name for singlets) with beer logos on them – particularly Asian beers. I do also have a deep dislike of flip flops and sandals.
Q: And now for the poignant Barbara Walters tear jerker--If you were a tree what kind if tree would you be? But let’s change tree to a spice - If you were a spice what spice would you be. No fair answering Sporty or Posh or Scary. OR If you were a wine what wine would you be? Try not to cry as you answer.
Star anise. It changes the flavour of everything it goes into and it’s the prettiest spice of all. If I was a wine I’d be a big Aussie Shiraz and because I’m currently in Bendigo, Australia it would be a good bottle of Turners Crossing 2005 The Cut Shiraz.

TERENCE CARTER
Terence is a professional photographer who has shot photos for travel guides for DK, Lonely Planet, Footprint and Thomas Cook (including Top Ten Dubai and Abu Dhabi guide, Dubai Encounter, Buenos Aires Encounter, Dubai city guide, Best of Brussels Bruges Antwerp & Ghent, Milan and the Lakes, Calabria and Northern Italy) and had his photography published in an array of travel magazines including National Geographic Traveler, Lifestyle+Travel, Paperplane, and Get Lost. You can look at his photography at www.terencecarterphotography.com
Posted by Marcy Gordon at 9:46 PM