I first tried winemaker Greg La Follette’s wine under the Tandem label at the 2009 Wine Bloggers Conference speed tasting. Say what you will about the merits of the speed tasting rounds, but it does serve to set in your mind wines that are very good or “very not so good”. The Manchester Ridge was in the very, very, very good category and I kept thinking about it for days afterwards. It was one of the most enjoyable and surprising Chardonnays I’d ever had.
Next thing I know, I got a bottle of Tandem Pinot Noir in my Quivira club shipment and it sparked me to learn more. Tandem wines was started in 2001 by Greg La Follette and then purchased by Quivira in 2009. Subsequently in 2010, Quivira owner Pete Knight made the great decision (in my opinion) to roll out Tandem into the new brand La Follette.
After that initial WBC tasting in 2009, I bought a case of the Tandem Manchester Ridge Chardonnay and a case of Tandem Sangiacomo Pinot for a Christmas party I was having. It’s funny how a lot of people say they don’t drink Chardonnay. But what’s more interesting, is my friends who say the opposite, “I don’t drink red wine!” (Hmmm… I know what some of you are thinking -- get rid of those friends, but hey, it was Christmas time.)  Plus I have friends from all walks of life the majority of whom are not wine bloggers, merely casual wine drinkers, and I have somehow become their go to person for recommending wines and helping them expand their wine horizons. I’m no expert, I’m just a diligent explorer and always looking to share something I think is great.  So when I have parties I try to have something different on hand they will enjoy.
I set out both wines at the party and watched people’s reactions. You know a wine has someone’s attention when they try it and then they go pick the bottle up again and say “Wow who makes this Chardonnay?” Or my favorite line “This is Chardonnay? I don’t drink Chardonnay. Where did you get this?” (Oh how quickly our tightly held convictions crumble in the face of a great wine!)
Days later I had people calling to thank me for the party and ask about the wine. “Can you tell me again that name of the wine you served? It was so good.”  No surprise that it was the die-hard ABC (Anything But Chardonnay) red wine aficionados that went gaga over the La Follette. Mission accomplished.
Recently I was sent a sample of the Manchester Ridge Chardonnay under the new La Follette label-- and it’s as amazing as ever. So balanced and bright, with crisp apple and pineapple notes. It’s creamy without the dull thud on the palate some Chards can deliver. 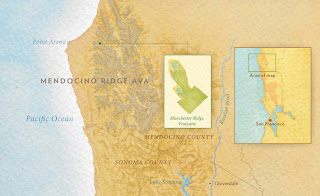 Maybe La Follette Chardonnay should be called “Beyond Chardonnay” as I think it’s in a class all it’s own. Even the Manchester Vineyard is out on it’s own. If you look at a map the vineyard for Manchester ridge is located way north of Sonoma on the Mendocino Ridge AVA. It’s high elevation and cool coastal temperatures is not a typical growing area for Chardonnay. But that is perfectly in line with the winemaker’s philosophy of crafting wines from outside of so-called “safe growing” zones.

As I learn more about wine I realize the multitude of facets there are to every part of the process from growing to bottling. It’s a vast knowledge base. And I admit, my goal is not to become a student of winemaking, just a better educated consumer. But when you find a wine that really sparks your interest, it’s through its graces that you are led deeper down the path to understanding it. Or as I like to say Grok it! (For those of you unfamiliar with this term, it’s from Heinlein’s Stranger in a Strange Land; it means to so fully understand something in its essence that you practically become it.)  I like to experience wines from all over the planet and love discovering new favorites, mostly I drink and enjoy them in the moment. But with La Follette I want more. I really want to grok Greg’s wines. And I will stay on that path for as long as full grokdom takes.
So now you can find and enjoy Greg's wines under his eponymous brand La Follette. Visit the La Follette website for more in depth information on winemaker Greg La Follette and the “vineyard-designate” Pinot Noirs and Chardonnays from the vineyards of Lorenzo in Russian River Valley, Manchester Ridge, van der Kamp, and Sangiacomo.
La Follette also makes stunning Pinot Noir’s as well and I’ll address those at a later date, as this post is for Chardonnay day.
Posted by Marcy Gordon at 12:50 PM