What I Read This Summer 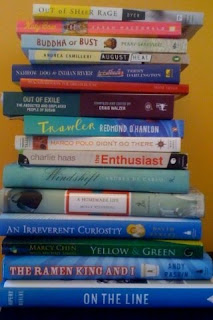 Summer flew by as usual but I was able to get in quite a bit of reading despite the time wasting distraction of Twitter. I average a book a week, sometimes more. Is there such a thing as binge reading? If so, am I book bulimic? Oh well, there are worse things I guess. Here in no particular order are some of the books I read this summer. The links in most cases go to the authors site rather than amazon. If possible I suggest you buy your books from your local indie bookstore. Indie Bound is a good resource for locating the store nearest you. It's more important than you think.

Blackberries in the Dream House By: Diane Frank --Lyrical long tone poem about a relationship between a geisha and a buddhist monk.

An Irreverent Curiosity: In Search of the Church's Strangest Relic in Italy's Oddest Town By: David Farley --I loved this whacked out book about a town in Italy and it’s preoccupation with a scared relic. You can find Farley on twitter here.

August Heat By: Andrea Camilleri, Stephen Sartarelli--Another in the Camilleri series about Sicilian detective Inspector Montalbano- if you like Sicily you’ll like this.

La Bella Lingua: My Love Affair with Italian, the World's Most Enchanting Language By: Dianne Hales--I enjoyed this book. But unless you have a real love for the Italian language you might find this to be more than you bargained for. Hales is on twitter @becomingitalian.

Wind Shift By: Andrea De Carlo--Have only read De Carlos previous books in Italian, and this, his first written in English, leaves much to be desired.

The Ramen King and I: How the Inventor of Instant Noodles Fixed My Love Life By: Andy Raskin-- Another book I learned about on twitter. This was like the Male version of Eat, Pray, Love -- Eat, Pray, F#*k. Raskin is on twitter @araskin

The Enthusiast: A Novel By: Charlie Haas-- Captivating and thoroughly enjoyable. Hass is on twitter @Charlie_Haas

Yellow & Green: Not an Autobiography of Marcy Chen By: Marcy Chen--I learned of this book and of Marcy Chen on Twitter so did not really know what to expect. It reminded me of the movie Double Happiness which is also about a young ABC (American Born Chinese) woman navigating the world at large. Chen used to be on twitter but her account is no longer available. UPDATE: Chen is back on twitter @marcychen

A Homemade Life: Stories and Recipes from My Kitchen Table By: Molly Wizenberg-- Was okay, but somehow I expected more from this blog to book, book. Wizenberg naturally is on twitter @mollyorangette

The Learners by Chip Kidd- Interesting but it’s no Cheese Monkey. The Cheese Monkeys is still my favorite Kidd book. Kidd is on twitter at @chipkid

The Ongoing Moment By Geoff Dyer—Fascinating epistle on photography and the archetype of photos by the leading photographers of the last 100 years.

Trawler: A Journey Through the North Atlantic by Redmond O'Hanlon--Fabulous, funny, crazy, romp into the deep sea of O'Hanlon's brain riding on a perfect storm of narrative.

Narrow Dog to Indian River by Terry Darlington--Two Brits and their dog. take a long skinny boat down the Intercoastal waterway on the Atlantic coast.

Here Comes Everybody: The Power of Organizing Without Organizations by Clay Shirky--Duh of course he's on twitter @cshirky

Out of Exile: Narratives from the Abducted and Displaced People of Sudan By Craig Walzer, Dave Eggers, and Valentino Achak Deng --Amazing and devastating personal stories from interviews conducted by Walzer with the Sudanese.

Marco Polo Didn't Go There: by Rolf Potts -- Collection of Potts' stories and his comments on the story behind the story. Rolf is on twitter but keeps a very mute low profile @rolfpotts

Buddha or Bust: In Search of Truth, Meaning, Happiness, and the Man Who Found Them All by Perry Garfinkel -- This sojourn into the world of Buddhism and the road to enlightenment is funny and informative. Perry is sort of on twitter @PerryGarfinkel

So, what did you read this summer? Next up: Fall Reading List.