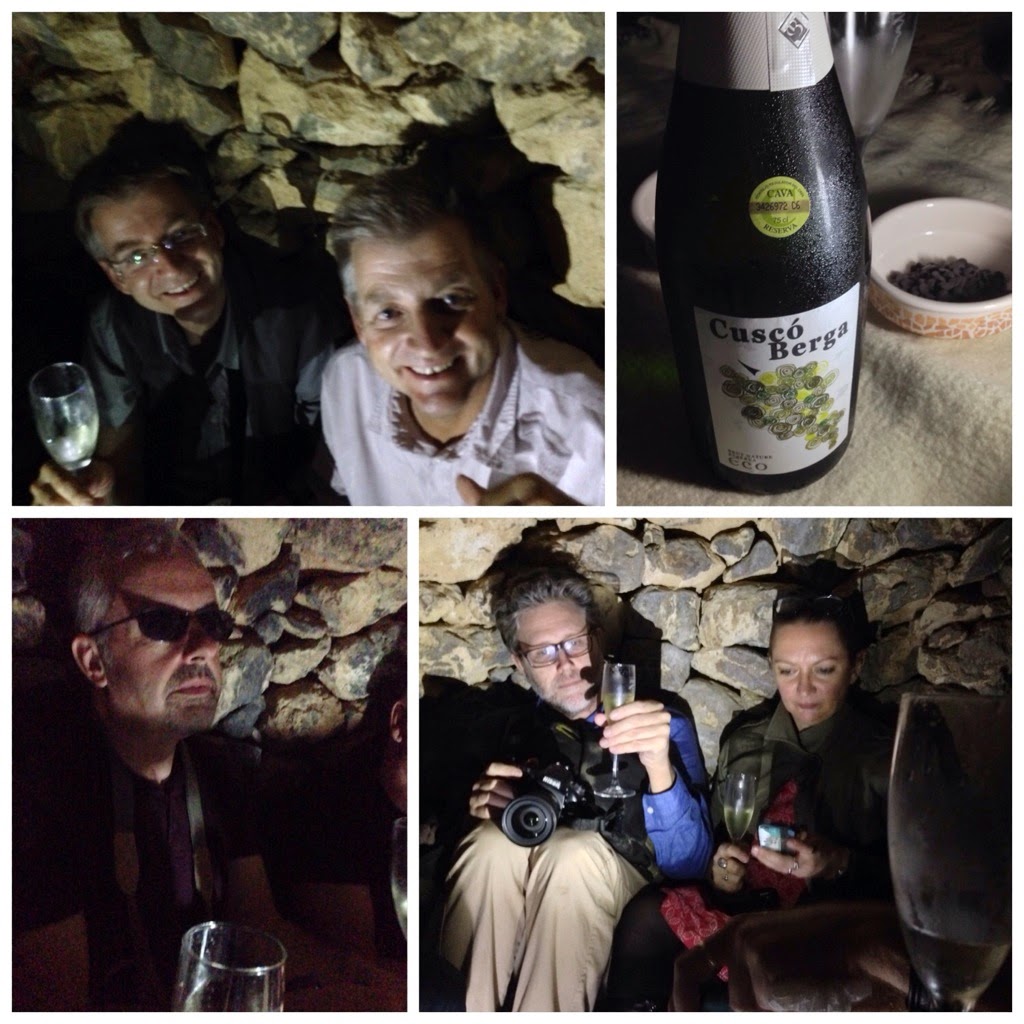 This past October I was in Spain visiting Cava producers as part of the sponsored 50 Great Cava's Tour. One of the wineries we visited, Cuscó Berga, has been on my mind ever since.

Located in Les Gunyoles d’Avinyonet in the Penedès wine region of Catalonia, Spain, Cuscó Berga is owned and operated by three brothers—twins Joan and Lluis, and their younger brother Jordi.

From the back balcony of Cuscó Berga views of the countryside are expansive, but there were no vines to be seen.

“Where are the grapes I asked?”

No sooner had I asked the question, we were off in a vintage Land Rover for a tour of the vineyards. As we drove down the narrow street, gears grinding loudly, I noticed three women give us the eye as we whizzed by. I imagined their conversation: There go the village winemakers! Again!


We drove for about fifteen minutes and then abruptly turned off the main road onto a dirt road. The Land Rover lurched and heaved over a deeply rutted track that snaked through dense wood and shrub filled land and past blocs of vines, some more than 40 years old, planted in a rocky mixture of sand, gravel, and clay soils. Lluis drove the Land Rover with absolute joy and abandon. I’ve never met anyone with a greater sense of glee behind the wheel.

We stopped to examine a few of the vineyards and look through a refractrometer to gauge the brix (sugar content of the grapes), while at the same time, enormous mosquitoes tested our blood sugar content via our exposed skin.

As the light began to fade, we drove past more vines until we come to a fork in the road. In the distance we could see a clochán perched up above the dirt path. The clochán, a stone hut used as shelter from the elements, was hand built by the brothers' grandfather. 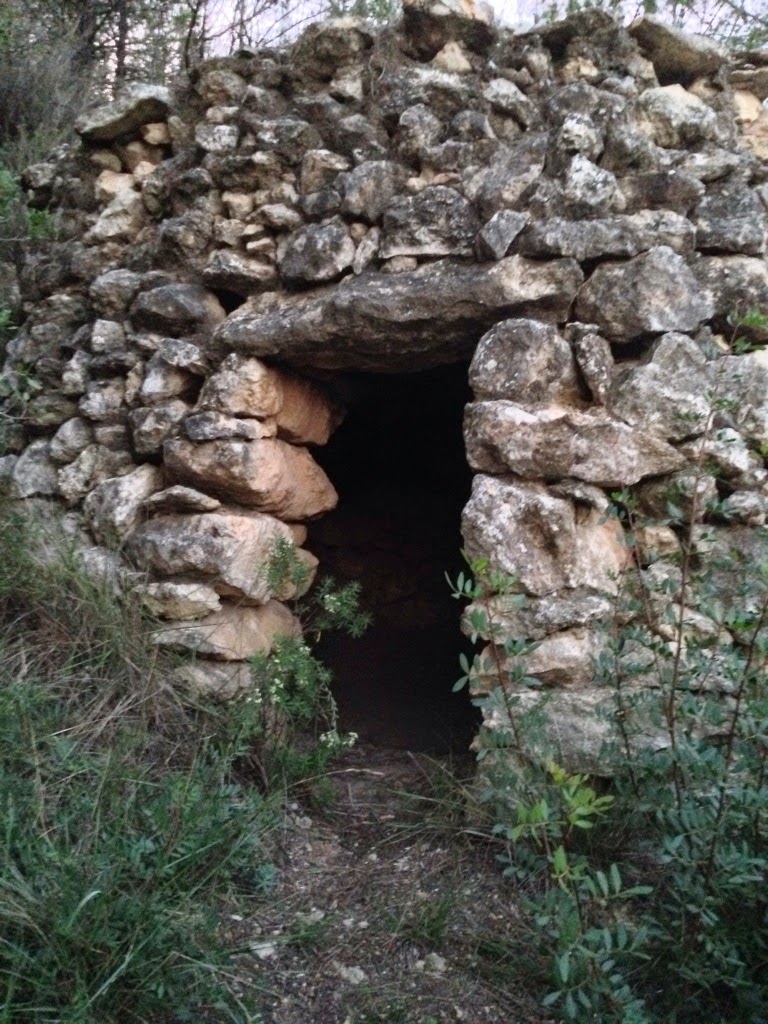 We pulled up in front of the beehive shaped structure and the brothers hurried in telling us to wait outside. A few minutes later, we were beckoned to enter. Inside we found sheets of newspaper carefully laid out around the perimeter for seating, along with several bottles of Cava, and bowls filled with chocolate pieces. It was like a clubhouse, albeit a very tiny one, for Cava Connoisseurs. The cool air inside smelled like petrichor--earthy and damp with a hint of limestone, and was a welcome relief from the muggy heat outside. 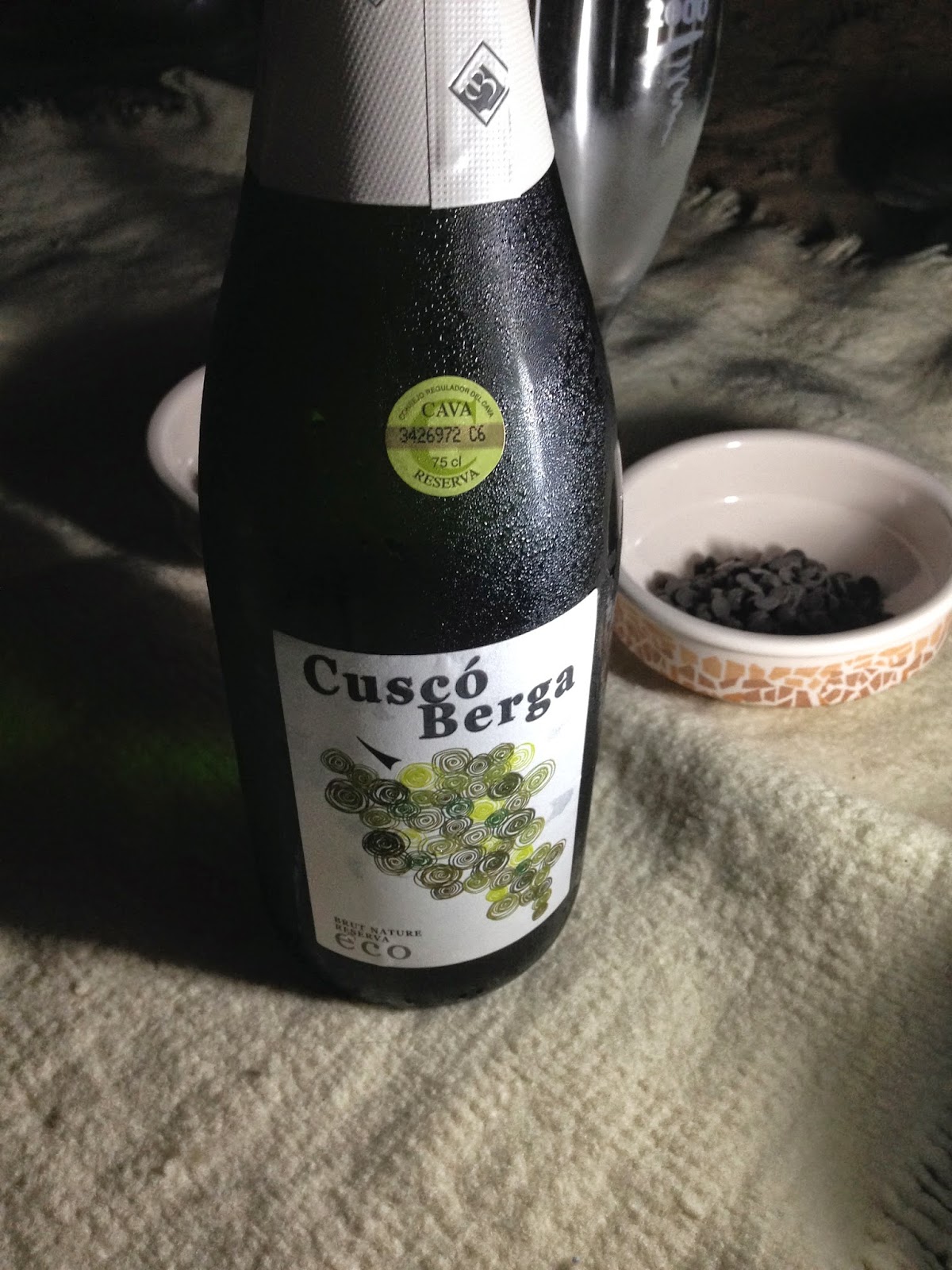 The ten of us squeezed in hip-to-hip, kneecap-to-kneecap and I began to feel claustrophobic. I mentally tallied a list of all the things that could go wrong and tried to dismiss each one in turn as I ticked them off. Spiders? None that I could see. Bats? Not yet. Snakes? Let’s hope not. Sudden earthquake and hut collapse? Well, that was a possibility. But I could not shake the feeling that a bear, out gathering berries, might return any moment and not be thrilled to find Goldilocks drinking his Cava.


Fortunately, I was snapped out of my fears when a bottle of Cuscó Berga Brut Nature Reserva Eco, was popped and our glasses filled with a blend of Macabeu, Xarel•lo and Parellada.

I watched the bubbles race to the rim of the flute in the flickering light and tasted the Cava’s fresh mineral notes of limestone, peach and touch of pineapple.

After my third glass of Cava I was no longer claustrophobic. I detected a powerful harmonic vortex around us and sensed the pulse of the land as it emanated up from the earth, a singular vibration coursing through my Cava addled brain, and I liked it.

I’ve tasted wine in rustic places and very swanky places but never in so magical a place. Outside the hut I felt transformed, spiritual like, and it wasn't just the fresh air. I emerged from the hut with an incredible lightness of being, positively buoyant. I don’t know what the others in the group experienced, but they seemed less gobsmacked than I was. Oh well, some of us have more finely calibrated sensibilities for the energy of the land I guess.

Back at the winery we enjoyed more Cava including the Cuscó Berga Brut Rosé made of 100% Trepat, the Brut Nature Tradition Reserva Cava DO, and Brut Gran Reserva both made of Xarel•lo, Macabeo and Parellada. The wines reflected the brothers unpretentious zest, sincerity and enthusiasm, giving each Cava an inner sparkle.

If you are planning a trip to the region I highly recommend you put Cuscó Berga on your list. I dare say I’ve never had more fun fending off claustrophobia, swatting away mosquitoes, or getting thrashed around in a Land Rover.

I’m not sure if the vineyard tour is available to all visitors at the winery, but if you find yourself there and hear the jingling of keys, ask if you can ride along. It may just be the most transformative vineyard tour you ever take.

Here is a short video slideshow of the visit:

*NOTE I delayed this story way too long while awaiting some photos from one of the photographers on the trip, but I never got the pictures he took, so you’ll just have to imagine how beatific I appeared emerging from the Cava hut.