Adagio con Fabio-- Off the Grid in Puglia


It's the last day of May as I post this, but the memory of the deep freeze in Italy this past February is still present in my mind. After the International Wine Tourism Conference media trip ended in Naples, I met up with my friend Fabio who I wrote about previously here.  Despite the monumental amount of snow, we made it through the blizzard like conditions on the A16 to Puglia. There was an occasional burst of sun, but mostly I viewed the region through a scrim of grey.

We stayed on an organic farm outside of Brindisi with Fabio's cousins. Over the course of several days Fabio took me to Lecce and on a modified version of the food and wine tours his clients can experience. The short video below is just a little slice of what I experienced -- Adagio con Fabio.

The area around Brindisi, Lecce and San Donaci is flat and full of vines and olive groves. Olive tree forests really. Miles and miles of ancient twisted trees line almost every road. In between the olive orchards are acres of grapes, many of them growing on alberello vines that are like little trees and un-trellised.

The primary grape grown in Puglia is Negroamaro, a red grape that produces dark and earthy wines with rustic sensibilities.  Fabio set up tastings for me at Candido, Cantele, and Apollonio --I'll tell you more about that in the next post. 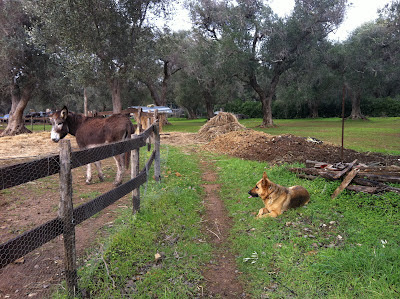 One very personal aspect of my visit to Puglia was staying with members of Fabio's family on their organic farm outside of Brindisi. Is there any better way to experience a place than living with locals? Not really. But it helps to have a guide like Fabio bring you close to "native" status. We ate most of our evening meals with the family and each night I was amazed as more people appeared and squeezed in around the table for some hearty and delicious fare direct from the garden.

It does not get any more "farm to table" than this. No photos of the meals, as I did not want to drive one more nail in the the coffin of crazy Americans and their rude eating habits.  Italians love their iPhones as much as we do, but you rarely see them on the table at dinner. An exception was made for the wine shots. When one of the youngest members of the family asked her father what I was doing, he replied-- "That's her job, to drink and take pictures." Her eyes grew wide at this news and her teenage siblings nodded in approval. Wine Blogger -- ersatz role model. Someone has to do it.

It's always been my experience when staying with Italian friends and relatives that the serious partying is reserved for your last night there. All the "artisanal" mystery beverages are brought out and things can get interesting quickly. I added to the offerings with a bottle of Apollonio Valle Cupa and the Candido Aleatico which we were all surprised to find was a deep ruby color, not the amber or orange color expected in a sweet wine. 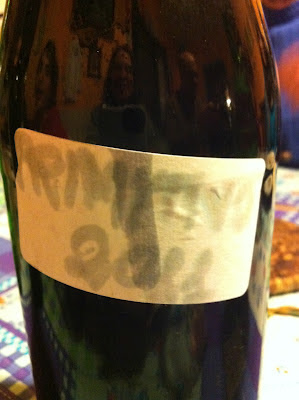 This bottle marked Primitivo with a piece of masking tape showed great promise and I think it's likely to be quite good in a few years. Frankly, I liked it better than the 50/50 blend of Primitivo/Negoramo I bought at Apollonio. The home brew had some tannin chops, maybe too choppy, but give it some time. 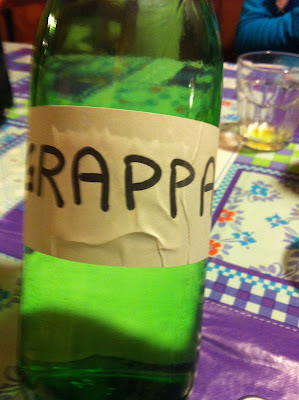 Fear not the hand labeled bottles there's some good, albeit powerful, stuff inside. The homemade grappa packed a wallop and darn near took the enamel off my teeth, but after the third sip it mellowed considerably. As did I. 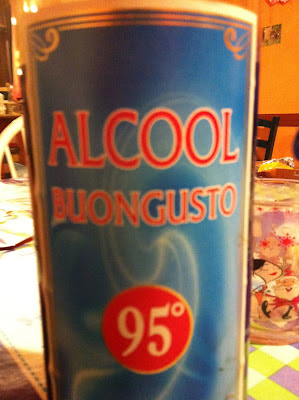 I have no idea what was in the re-purposed Alcool bottle, but we all drank it and survived. Needless to say I slept very well that evening.

If you are planning a trip to Puglia and want to have a personalized food and wine experience with much laughter-- contact Fabio via twitter @fabiopittella or visit his web site linked below.