Battle of the Napa Chefs: Benefit for the Blue Oak School 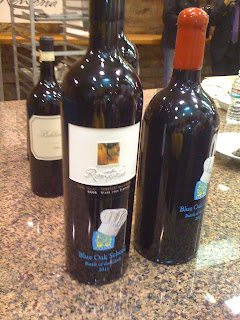 This past Saturday I was invited to attend The Battle of the Chefs, a fundraising event at the Culinary Institute of America for the Blue Oak School in Napa. I live tweeted the event but there was so much going on, it was beyond the limits of twitter to capture it.

All the elements were in place:

* A stadium kitchen courtesy of CIA

* A panel of judges

* And in the role of Alton Brown—Barry Schuler co-founder of Blue Oak School and owner of Meteor vineyard. You can read more about Meteor and Schuler (the Mayor of Coolsville) in one of my previous posts here. 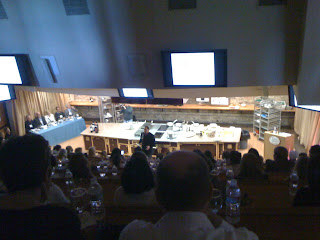 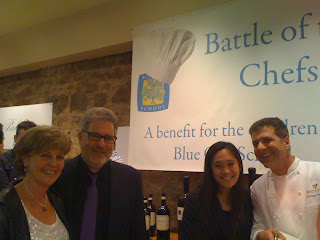 While Schuler, Master of Ceremonies, riffed on new Iron chef style slogans to replace “Whose Cuisine Will Reign Supreme?” such as: Whose Meal is the Real Deal? Which Cook Is Off The Hook? Who Will be the Master Cooking Tasker? Who’s Chow will Wow? Whose Food Will Be Real Gued?? …you had to be there for that last one …the crowd began to speculate on what the secret ingredient might be.

Thankfully the slogans were interrupted by the moment we had all been waiting for—the unveiling of the Secret Ingredient. Cue dry ice and strobe lights…and the ingredient was—Napa Valley Cabernet Sauvignon. Oh what a curve ball! On with the show!

It should be noted that I can not be 100% sure on some of the ingredients used and items created as there was a slight audio problem in the beginning of the show and it was quite difficult to hear much of what was going on. But to the best of my recollection here is what the Chefs prepared. 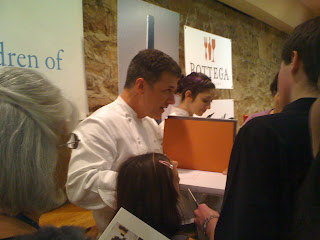 The entrée was presented with an inverted glass of smoke from the vine cuttings that the lamb was prepared with. Hmm… Where might have Chef Chiarello learned this technique? Last time I smoked anything under a glass it was in college and it did not involve lamb. But it certainly wowed the judges as they took a whiff of smoke then tucked into the lamb. Style points noted 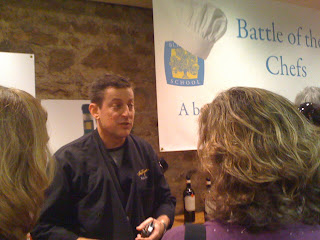 Appetizer: As I mentioned it was hard to hear and see from the top of the stadium, but it sounded like his app included cheddar cheese tapioca. And I think green peppercorns also played a role in there somewhere. But suffice to say everything Chef Frank made smelled amazing.

I can now fully appreciate what it must be like to go to a live taping of Iron Chef or any cooking show for that matter. It is sheer torture. You hear the sizzle and smell the aromas, but you can’t taste a single morsel--only watch helplessly as the judges’ taste the dishes and contort their faces into expressions of ecstasy and approval. Oh yes, watching is torture! It would have been nice to taste the food too. But seeing as the event was all in support of the Blue Oak School, it’s understandable and forgivable.

During the intermission guests were treated to a selection of wines from Pahlmeyer and Renteria vineyards. I tried the Pahlmeyer Cabernet and I really loved its elegant dusty leather and smokey blackberry flavor and wish I could have paired some of Chef Frank's entrée along with it.

One of the highlights of the break was getting the chance to meet and speak with Salvador Renteria and his wife, Maria Louisa. We chatted about the beauty of the Napa valley and how much Napa resembles parts of Italy. The Renteria’s were so engaging and it turns out they have a daughter named Marcella, which is my name too. No wonder we hit it off.

After the intermission we returned to the stadium for the results. The tension was as thick as the smoke in the air. And the result was---split! Chiarello was declared king of the apps while Chef Frank won best Entrée.

The Napa Patch also covered the event and you can read that account here.