A Touch of Glass

I received a sample of the Eisch Breathable glass and conducted the following experiment to see if it had any noticeable effect on the wine. I was not paid to write this and I probably won’t be offered to sample anything else after this, but a girl can hope.

The premise behind the Eisch glass is that it is designed to be “ breathable” and aerate the wine faster than decanting. I tested the Eisch glass along with a glass of similar size, shape and quality.
I am a big fan of good glass. I really believe a fine crystal does make a difference in the wine. I don’t know if it has to do with the molecular viscosity aspect ratio of the permeable membrane dynamics or if its due to fairies with pixie dust…but I can tell a difference. (BTW I just made that membrane dynamics stuff up– but sounded good no?)
There are two questions that are usually posed regarding glasses and wine.
1. Can a great glass make a good wine better? {I say yes.}
2. Can a great glass make a mediocre wine great? {No}. There is only so much the fairies can do. Bad wine is bad wine end of story.
But let’s get back to the Eisch test. 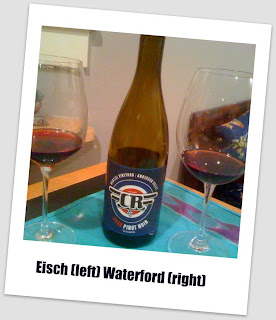 I have a set of very nice Waterford glasses from the Robert Mondavi collection, which are pricey but beautiful and really show off a nice wine. I don't use them everyday, and I’m probably not going to serve you wine in them when you visit, but I do drink out of them when I have a nice wine I want to savor.
The Eisch glass instructions said that within two to four minutes the glass would work its magic and aerate the wine as if it were decanted for an hour.
I poured wine into both glasses and waited three minutes. Then to create a double blind scenario, I blind folded a friend and had her smell and taste the wine without letting on which glass was the Eisch and which glass was the Waterford.
Well right off the bat the whole blindfold thing was a disaster because on the first sip she misjudged where her mouth was and spilled wine all over herself. Oh what a mess. But after she got cleaned up we decided it would be best if I just held the glass up to her lips to sip and avoid any more accidents.
So that worked pretty well. She sat blindfolded with her arms to the side and I held the wine up to her like some high priest giving communion. Then right in the middle of the experiment my husband walked in on us and you would of thought we were conducting some sort of satanic ritual the way he looked at me. And I have to admit it did feel kinda of cult like, but not kinky in an Eyes Wide Shut sort of way, just a bit odd is all I’m saying. But I guess he was not expecting to see our neighbor in the living room blindfolded and in her bra*. (*it was a sports bra so not pervey as you might think) Anyway I thought it was hilarious. He did not and mumbled he had to go to the hardware store. But I insisted he stay and try the experiment as well.
Results:
Friend: She found the bouquet more pronounced in the Eisch and felt the wine was more open and fuller and preferred the Eisch to the Waterford glass.
Husband: His impressions were the reverse, he found the wine in the Waterford glass to be more open, fuller bodied, and flavorful.
Me: I found the Eisch glass gave the wine a rounder fuller mouth feel and bigger flavor at first but after about 15 minutes I could not tell a difference between either glass.
So all I can conclude from the experiment is that we did indeed notice differences but could not agree on what the differences were. 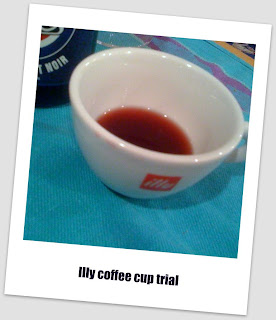 Then just for fun we drank the same wine out of coffee cups (Illy heavy white porcelain cups) and that was a shocker. The wine really did not taste as good as it did in the glasses. I’m guessing that it’s because of the way the thick fat lip of the cup makes you purse your lips more and possibly interferes with the palate, while the super fine thin edge of the crystal glass allows you to sip the wine right in between your lips with no awkward mouth maneuvers. I don’t know the reasons for sure, but there really was a noticeable difference in the wine sipped from coffee cups vs. the wine glasses.
Conclusion:
I think there was a difference with the Eisch. But I also think it’s because the Eisch is a nice glass and nice glasses make a difference.
Final summary:
Eisch Glass: $40-45 (SRP)
Cellarrat Pinot Noir: $42
Look on husbands face upon seeing neighbor blindfolded and in her bra: Priceless!
Posted by Marcy Gordon at 1:51 PM