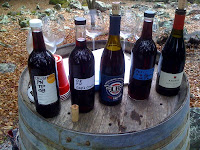 Last Sunday I was invited to a tasting featuring wines made by Alan Baker of Cellarrat and also the wines of Mark McWilliams of Arista Winery in Healdsburg.

The group in attendance were mostly experienced wine bloggers and professionals (@winebratsf, @thesnarkhunter, @oenophilus, @dmhoro, @thebeerwench, @sharayray, @dirtysouthwine and @DanicaSattui) Even though I blog about wine I don’t really think of myself as a wine blogger, but more as a writer that happens to like wine. I tend to think in terms of story telling and relating an experience rather than writing about wine with just facts and figures. And honestly at this point I really don’t know my malolactic fermentation from my elbow, so I’m approaching learning all this wine lingo in much the same way I learned Italian. I studied here and there, but most of all I had lots of exposure to people who spoke the language and then one day poof--- I just suddenly understood what people were saying. I’m hoping this will happen with wine speak too.

The one thing I absolutely love about winemakers, the thing I can most relate to, is that they are deeply devoted to crafting something wonderful that will connect with an audience, you, the consumer. And that’s exactly what it is to write. You toil away and hope to produce something that your readers can connect to, relate to, find resonance in-- be it a serious piece or humorous--and in the process reveal a deeper part of yourself just by putting it out there. So winemakers are like writers too. Instead of adjectives and nouns and paragraphs, etc. they craft their story (the wine) with the elements of land, climate, and grapes.

Alan has the spirit of a writer in my opinion, and through his wine I believe I got a better understanding of who he is. His story/wine is not a quick beach read by any means, it’s a deeper more nuanced tale, much like a well crafted thriller that grips you right away and keeps you interested till the last page or drop as the case may be. Pinot Noir with a ‘film noir’ sensibility.

As we tasted the samples, I began to get a sense of the journey the wine makes on it’s way from vine to barrel to bottle to your table and I could almost see the gears working in Alan’s head as he thought about what each wine needed and where it might be going. 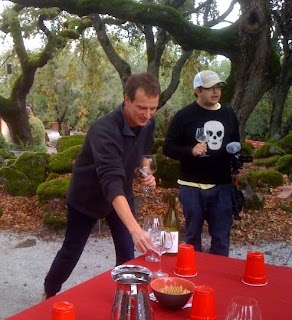 For me, tasting barrel samples is similar to reading a first draft of a book. The basics are there but it needs tweaking, polishing, greater development to be a full manuscript. I could detect particular elements in the samples that were like characters in a novel just introduced, but not yet figured into the plot.

We also tasted the first ever Cellarrat bottle of 2006 Pinot Noir Wentzel Vineyard from Anderson Valley and it had all the makings of a best cellar. But be it a bestseller or best cellar, my palate believes that Alan Baker has a long career ahead of him as a top winemaker.

Next we met with Mark McWilliams of Arista and tasted Pinot Noirs from vineyards of varying elevations. I was surprised by how clearly I could detect the differences in the wines as reflected by their growing conditions. I favored the 2007 La Cruz Vineyard Pinot Noir, Sonoma Coast, which I found very balanced with mellow tannin action. And I also liked The Toboni Vineyard Pinot Noir, RRV-- This was a wine I’d like to spend more time with and get to know all it’s complex ways on a rainy day with something savory like duck or a rabbit ragout over polenta. And that was the thing about the wines of Arista I enjoyed most--with each one I tasted I immediately thought of what I’d like to eat along with it. 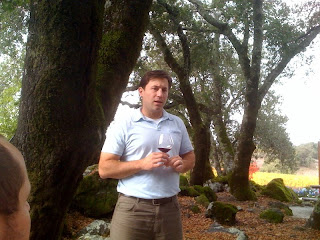 I was impressed that Mark seemed as excited about the wines as we were, as if  he was tasting each wine for the first time as well. He also seemed truly grateful and humbled by the incredible land and surroundings in which he lived. It was almost like he was still in awe of the great life that he was living and thrilled to be able to share it and tell the history of it all. Maybe Mark will be all jaded and spoiled in about twenty years, but I sincerely doubt it. He appears quite genuine and his wines echo that sentiment as well.