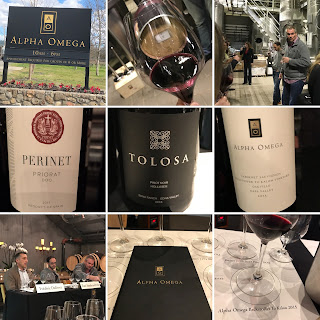 On Monday this week, I attended a special tasting at Alpha Omega Winery introducing their new Alpha Omega Collective, an umbrella brand featuring Pinot Noirs from Tolosa in Edna Valley, and Perinet’s Mediterranean reds from the Priorat in Spain.

The conversation with the three winemakers Jean Hoefliger of Alpha Omega in Napa Valley, Frédéric Delivert of Tolosa in Edna Valley, and Antoni Sanchez-Ortiz of Perinet in the Priorat, Spain detailed their particular wines and winemaking philosophy and the threads of connection between the three.

The three common threads among the estates according to Hoefliger were expression of place within the very particular soils, wine balance, and acidity. Each also has a philosophy of making wines that are enjoyable now, and with the ability to age and drink later.

I particularly liked the 2016 Tolosa Hollister Edna Valley Pinot Noir, it was true to varietal form, a truly delicious love note to the grape. I found the 2016 Tolosa Primera Pinot Noir slightly elusive on the day I tasted, but the assets of the variety were all there. The limestone soils of Edna Valley, as well as the sea air, add a touch of salinity to the red fruits and give the wines freshness and acidity.

The 2015 Alpha Omega Beckstoffer To Kalon was exceptional and wines from this legendary vineyard are well deserving of the merit. We also sampled the 2016 Alpha Omega Era Napa Valley in barrel made from multiple vineyards across the valley, and only the second time ever made from 100% Cabernet Sauvignon. The Era proved to be a true expression and reflection of the valley.

Of the three estates we tasted from the Alpha Omega Collective, it was the Perinet that grabbed my attention with their sheer authority and bold flavor profiles. The 2015 Perinet Priorat DOQ is a blend of 33% Grenache, 25% Carignan, 25% Syrah, and 17% Cabernet Sauvignon. And the 2015 Perinet 1194 Priorat DOQ is comprised of 65% Grenache, 32.5% Carignan, and 2.5% Syrah.

I was particularly captivated by the 2015 Perinet 1194 Priorat DOQ – and with my first sip of the 1194 I felt like the tannins were going to pull me right inside the glass. I felt like I’d been punched in the cerebral cortex, and I mean that in a good way! This is a wine that can take you deep. It was wily, but graceful -- the Grenache and the Carignan flavors in lockstep, with a trace of iron and salinity. Antoni mentioned the wines were best with spicy food to compliment the tannins, and at lunch the sandwich I had included hot spicy mustard, and that did indeed balance them nicely.

The Perinet wines are filled with vibrancy and vitality and grown in a terrior described as a triangle with four sides, on two levels, that is rocky, dry, hot, and cold and sometimes all at once. The area is shaped like an amphitheater and bounded by the Montsant DO region.

Antoni talked about the unusual conditions the vines grow in and how they are much like individual children with special needs. And as he spoke, I was suddenly reminded of Rodrigo de Sousa, the maestro in the show Mozart in the Jungle. Rodrigo’s catch phrase to his orchestra is “Play with blood!” – meaning play with life force, vitality, energy and with soul; and I could imagine Antoni out in his vineyards saying —“Grow with blood!” as he directs and shepherds the vines to their full vigor and potential.

And then it struck me — the Alpha Omega Collective is much like a symphony with three dynamic maestros each conducting their respective threads of terrior, balance, and acidity. But I think a there is a fourth common thread as well—charisma—all the wines have a presence that cannot be ignored.