This past Saturday I attended a seminar on Russian River Valley Neighborhoods to learn about the characteristics and defining qualities of the wine region in which I live. The seminar was presented by the Russian River Valley Winegrowers Association as part of Pinot Classic weekend.

The Neighborhoods seminar took attendees on a guided tour through the Russian River Valley “sub” region vineyards of Middle Reach, Laguna Ridge and Green Valley via our olfactory senses and palates. The Green Valley appellation is a big one so it makes sense it might be a prime candidate for some slice and dice, but creating new AVA’s can be quite a political and thorny issue for everyone involved. And apparently there is no such thing as a “sub” appellation, so the areas discussed were called neighborhoods, which is the very clunky and clandestine way to say “sub” AVA.

Also on the panel, Steve Heimoff, who penned a definitive book on the region: A Wine Journey along the Russian River; and although the handout said he was from Wine Enthusiast, Heimoff is currently working for Kendall-Jackson. The final member of the panel was Heimoff’s little dog Gus. Gus did not say much, he was certainly cute, but looked to me like his name should be Schnapps.

As with any wine region weather is a crucial element and fog in particular is a big deal for Pinot. I can vouch for the distinct fog patterns that are unique to the RRV area and how it changes with the seasons. I marvel at how clearly defined the band of fog is that enters from Petaluma Gap to the south of the Sebastopol Hills vs. the slow hang and creep of the Middle Reach fog banks as compared to the “fill and drain” of the fog in the Laguna Ridge basin.

Despite varying winemaking protocols terroir trumps all and our goal was to see if we could detect the varying degrees of silt, sand, and clay soil characteristics of each neighborhood in the wines. The Russian River Valley Winegrowers are creating a searchable knowledgebase of the region to establish a baseline and common language to track and determine patterns of the neighborhoods and define what characteristics of terroir are expressed in a given region.

We were presented with nine Pinots to blind taste-- three each from vineyards in Green Valley, Middle Reach and Laguna Ridge. There were also jars of Franciscan, Alluvial, and Goldridge soils. The Alluvial and Goldridge smelled amazing, both emitting deep dark and complex aromas, but my jar of Fransican had barely any scent at all. 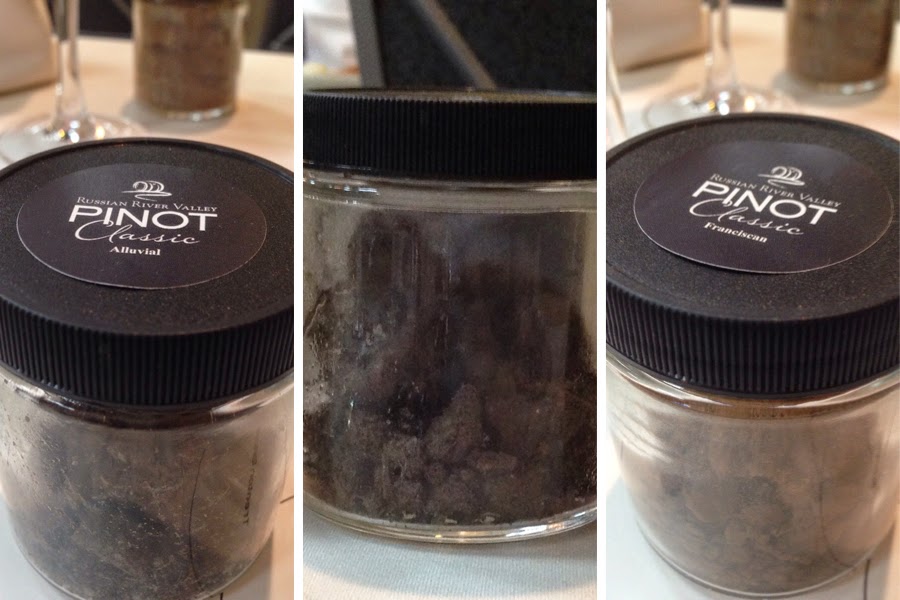 The Alluvial soil smelled so good, I suggested to Virginie Boone, seated next to me, that we add some water to the sample jar and do mud pack facials while we tasted through the rest of the wine samples. She wisely declined.

Tasting blind really helped me to focus in on the characteristics of each neighborhood rather than the style of the producer. I was able to guess a few of the wines, such as Kosta Browne and Arista, but I based those assumptions mainly on the vineyard name and location, which were big giveaways. 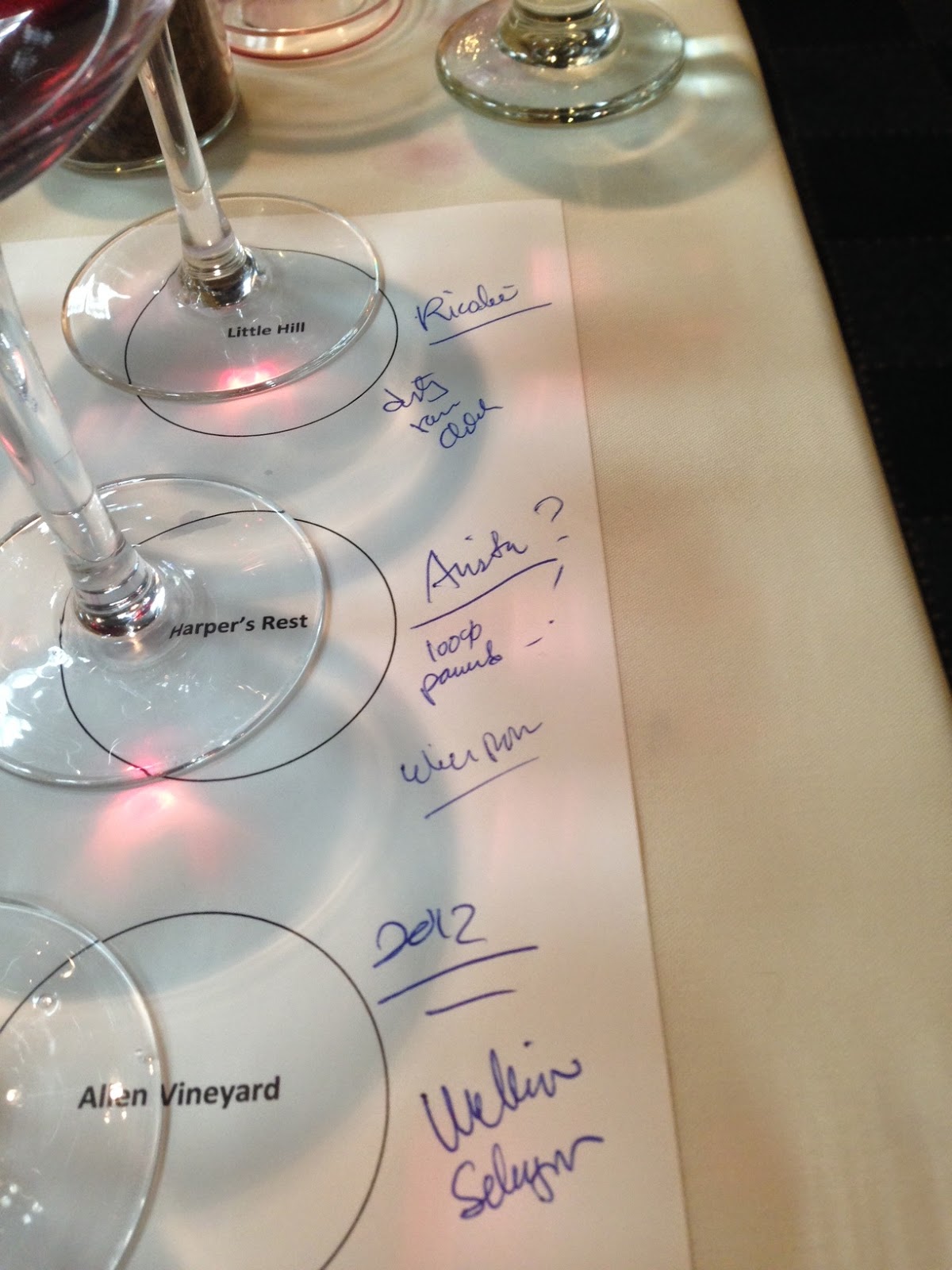 I also correctly guessed the Laguna Ridge wine from Goldridge soil. The moment I smelled the wine I had a hunch it was Dehlinger. A taste confirmed it in my mind. It was revealed at the end of the session to indeed be Dehlinger. {This rarely happens to me, so chalk one up for my blind tasting abilities!} No other Pinot I’ve ever had tastes or smells or drinks quite like Dehlinger. 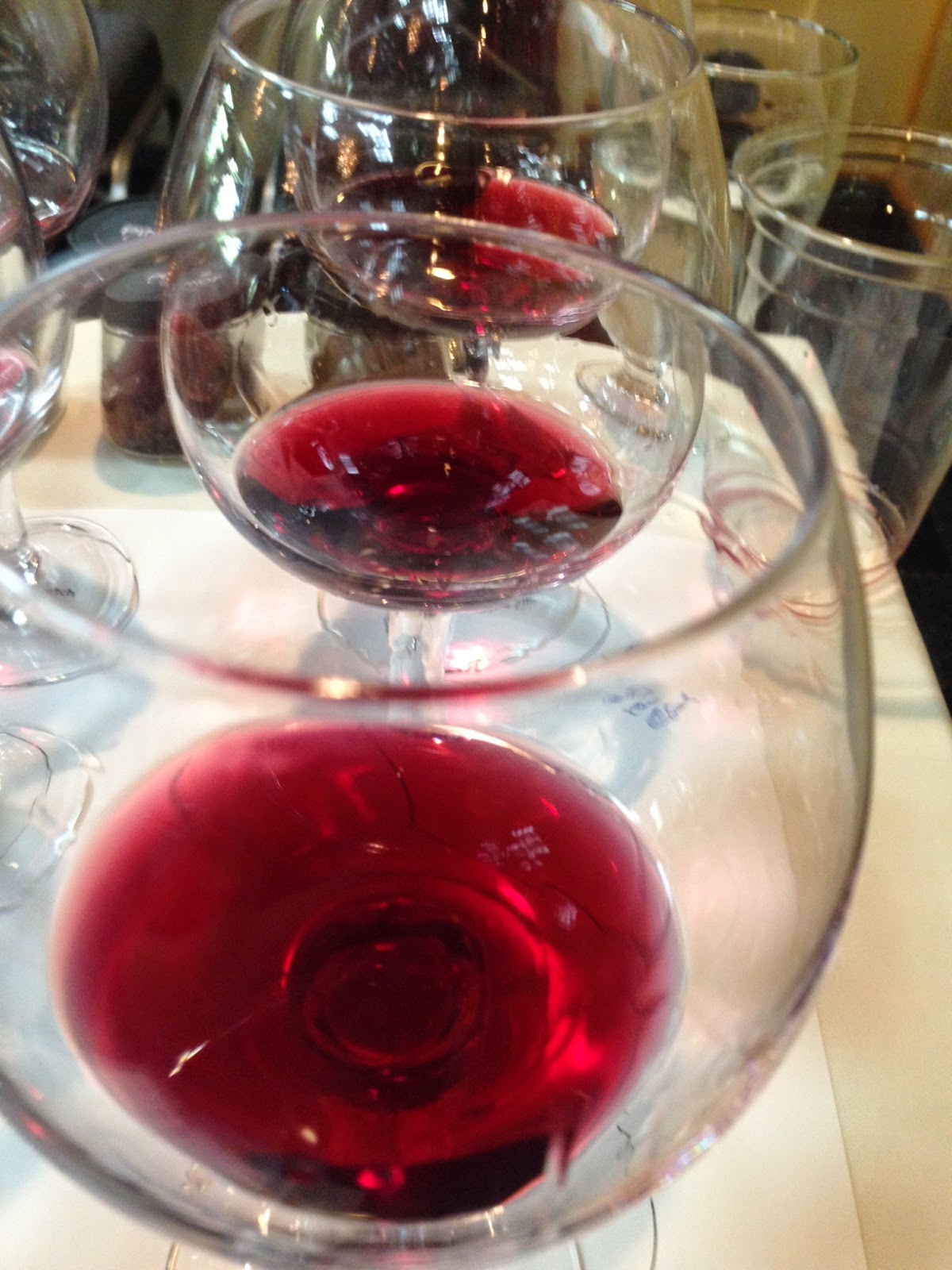 Here are a few of the quick notes and impressions I jotted down for each wine: