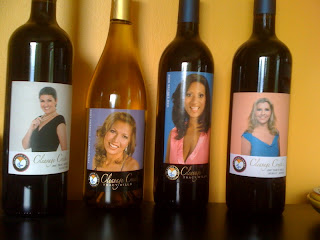 You can meet the most amazing people on twitter, and recently I began to follow and converse with Budge Brown the owner of Cleavage Creek Winery.

After Budge Brown's wife died of breast cancer he focused his grief and energy into fighting breast cancer and raising awareness for the disease in a very unique way: through wine. Budge created Cleavage Creek Cellars. Cleavage Creek donates a percentage of each bottle sold (before profit!) directly to breast cancer research. Plus each of the wines features the image of a breast cancer survivor on the label with a link to her personal story. How cool is that?

My mom had breast cancer. But her story had a bit of a twist. The twist being she didn’t tell us. Not a word. She went through six months of chemo followed by radiation and drove herself to her appointments without ever letting on to anyone what was going on.

My mother really believed in mind over matter. And mostly she believed that her matters were never you mind. Despite the fact we are indeed a very loving supportive family, she was as secretive as a double agent and twice as sneaky. I think at first she was subscribing to the “tree falls in the forest” approach. Meaning that if you don’t tell anyone maybe it’s not happening. So she did it her way.

When we finally did learn about it we were beyond shocked. “Why didn’t you tell us?” we asked. “Oh it was nothing.” was her reply. She was not afraid, just “annoyed and slightly inconvenienced” as she put it. She made it sound like it was no big deal; as if breast cancer was no more bothersome than getting the wrong order at a restaurant. She did not want us to worry, but more than that, she did not want us to interfere. She was so fiercely independent that she controlled all information as if it were gold in Fort Knox.

Some would call this behavior denial. Me, I just called it mom being mom. She was the type that if you asked her age would lean into you and say-“Can you keep a secret?” And you would nod “Oh Yes.” And then she would reply. “Well so can I” and never reveal a thing.

But one thing I know for sure is that she would have loved Budge Brown’s clever tribute to women and his support for the cause via Cleavage Creek Wines. She would have embraced his campaign and efforts fully because it’s fun and focuses on the positive, courageous and beautiful survivors.

Cleavage Creek recently sent me some of the wines to sample and not only is the cause worthy the wines are great as well. I tried some of the Tracy Hills 2007 Reserve Chardonnay paired with some samosas and pineapple chutney. The wine had nice spicy flavor, perfect for a toast to the memory of my mom’s fiery personality and legacy of independence. Here’s to you mom!

For more information on how you can purchase Cleavage Creek Wines and support breast cancer research follow this link. http://www.cleavagecreek.com/