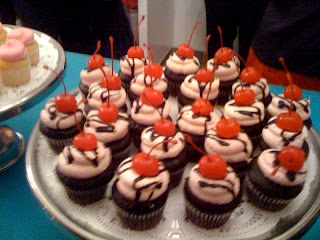 Any weekend that includes cupcakes, meatballs or pinot noir, is bound to be great in my opinion, but a weekend that includes all three is outstanding. I got to experience such a trifecta with cupcakes courtesy of Sift Cupcake Bakery in Santa Rosa. Meatballs from Serena Lourie and Alan Baker in Healdsburg at Pastapalooza! And Pinot at The Pinot Noir Summit produced by Barbara Drady and held in San Rafael. Albeit the last one was experienced vicariously via tweets because I was detained at a prior event and did not make it to the Summit in time for the grand tasting, but that’s the beauty of Twitter, it’s almost like the real thing.

On Friday, I attended the Grand Opening of Sift (@Sifted) in their new Santa Rosa location. We got a tour of the new facility from Shana Ray @sharayray and of course got to sample the cupcakes. There was a special sprinkle application zone and a custom frosting area where one could custom blend frosting with wine. The event was catered with small plates of food including some mighty tasty mini curry corn dogs! I think I had a little too much fun with the photo booth that was brought in for the occasion and the props that were provided to enhance the photo booth experience. Who know feather boas could be so flattering?

Unfortunately we had to leave the party before the fortune teller began reading palms so that was a drag, but I’m sure the only thing she would have seen in my future was more cupcakes.

Next stop, Healdsburg for Pastapalooza at the home of Alan Baker @cellarrat and Serena @slourie. Alan and Serena hosted a pasta fest of epic proportions. Three kinds of sauces and 200 homemade meatballs! Serena claims she has no Italian ancestors but her meatballs say otherwise. At the party I finally met Deborah Kravitz (@whatdebpours) in real life and got to meet many other new folks as well.

In the meantime, I can't wait for Alan’s next wine release under the new label Cartograph. You can follow on twitter at @cartographwines , but you'll have to get in line behind me to buy some when it's ready.

On Saturday Barbara Dradys (@wineevangelist) annual Pinot Noir Summit took place. As I mentioned above I was unable to make it, but I almost felt as if I were there via all the great tweets that attendees were sending out. I'm marking my calendar early so I will not miss out again next year.